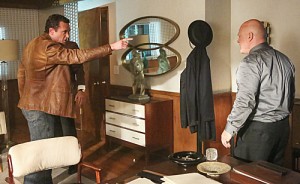 Vegas made its return tonight with an episode that certainly set up the drama to come in the next five episodes.

One of the things I have always enjoyed about Vegas is that it’s not a murder-a-week kind of show.  That being said, this week the Lamb boys burst into a motel room and busted Frank, conveniently an employee of The Savoy, for sexual relations with a minor.  However, Ralph’s attempt to locate the girl’s pimp goes south when FBI Agent Byrne, who happens to be a bit of a jerk, comes in with a deal — Frank can either talk to the Sheriff, or talk to the FBI about Savino’s operation and have the charges dropped.

Ralph, no doubt, is none too happy about the Feds screwing with his own investigation.

Seeing as Frank has been seized by the FBI, the Sheriff turns to the girl they found her with, Patricia, and tries to strike up the conversation with her — but, to no avail.  A stubborn and frightened young woman, Patricia refuses to talk about her pimp, even after Ralph learns of her tragic running away story after her grandmother’s death.

Over at The Savoy, Mia has figured out that it is Frank who has been speaking to the law, and goes to Savino with the news.  She’s given the authority to handle it at her own discretion.  She’s very cunning in her plan.  With the promise of a new dress and a thousand dollar chip at the casino, she bribes a gambling addict into playing the part of Patricia’s mother, and sends her to the Sheriff’s station to escort the girl from custody.  Mia then offers the girl money and secretarial school if she’ll leave Las Vegas.  This is all done knowing that Patricia is the only leverage the FBI has against Frank to get him to roll on Savino’s operation.  But — Patricia makes Mia promise to do something first.

Jack, who early on in the hour finally confessed to the DA Reynolds and Katherine about what happened with Johnny Rizzo, also spent the entire episode trying to convince Mia to be careful with the new FBI presence in town.  While she does not necessarily believe him (though her conversation with Savino indicates she may be suspicious) she does fulfill Patricia’s request to deliver a letter to him containing the location of Jimmy, the elusive pimp.

The B-plot in this episode was interesting enough, if not sweet, as we watched Dixon stage an affair to help Violet, the actress he may or may not be in love with, get out of a relationship with her director, Barry.  The plan turns into a string of favors: Dixon promises to have Yvonne get a new liquor license for the Savoy’s entertainment director, if he will fix a showgirl up with Barry (for Violet to walk in on) but the entertainment director has to let Yvonne audition.  He does — and Yvonne is good enough to head out to Los Angeles to meet with producers.

Dixon’s plan works, a little too well, and Violet ends up being cast in a new film and has to leave.  So, Dixon goes after her, conveniently leaving with Yvonne.

This was a great episode back for the series before it’s final stretch of episodes into the summer.  There was a lot of set-up for future conflict and situations that will bring the show to it’s season finale.  “Little Fish” showed us yet again that adoring family man that Ralph can be when he’s not playing the big bad sheriff, though we also saw him fight with Katherine for letting a case go in a different direction.

Personally, I fought the new, rougher side of Mia very interesting, and I am very interested in seeing how her new role in the Savoy operation will play out in the next few episodes.  Will she let Jack back in, or will she drive herself into the FBI’s custody?

And of course, something will happen with Dixon and Yvonne out on the road together.

I really admired Jack in this episode and his efforts to do the right thing for everyone, as well.  We’ll have to wait and see, but I have a hunch Jack will become even more pivotal to the end of the season’s plot.

What did you think about Vegas‘s return?  And what of that fancy new title sequence?  Where has that been all season?