Home
Television
Vegas
Vegas 1.19 “Past Lives” Recap – The Things Worth Fighting For 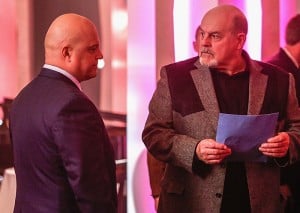 I think tonight’s episode of Vegas may win for having the most plots in one episode.

The main plot of the episode began with our not-so-friendly neighborhood FBI Agent Patrick Byrne, who took his determination to find information on Savino to a whole new level by putting extra pressure on Savoy employees for tax evasion.  One man, Ned Harris, found himself under the microscope by the agent, only to be later found dead and floating in his pool.  A coincidence?

The case became even more suspicious when Sheriff Lamb and Katherine could find no next of kin for Ned, and learn that the man didn’t even seem to exist before ten years prior.  It was only with the begrudging help of Agent Byrne that they found Ned’s true identity — that of Gary Spiegler, owner of a factory that burned down and killed someone.  After the incident he and his partner jumped bail, never to be heard from again.  The two go to visit the neighbor who found “Ned’s” body, and find that her husband “Harry” is the missing partner, Arthur Hauser.

But where is Mr. Hauser?

As it would happen, Hauser has been working at The Savoy since he and Spiegler first skipped town.  When Spiegler started to panic after Byrne took his fingerprints (completely unrelated to their prior crime), Hauser panicked as well, and killed him.  In his fit of paranoia and desperation, Hauser took Mia hostage in a suite at The Savoy, demanding $20,000.  Things got even more complicated for the man though, when Jack arrived to ask Mia about Ned-slash-Spiegler’s employment at The Savoy.  Though she tried to shoo him away as her captor demanded, she made a last-ditch effort to hint the problem to the deputy, only to have him end up hostage as well after trying to save her.  The two ended up handcuffed together, forced to watch when Hauser shot Tony, an innocent Savoy employee delivering the demanded cash, and go with Hauser to meet his wife to leave Vegas.

During the entire hostage ordeal Jack did an excellently unsuccessful job at trying to talk some sense into Hauser, and eventually gave himself up in exchange for Mia’s safety after Hauser’s wife refuses to leave with him.  It seemed as if time was running out, until Jack and Katherine walk into the Savoy looking for more information, assuming that Jack had informed Savino of his employee’s murder.  None of them, of course, have seen Jack or Mia all day.  Thankfully, the gunshot was reported and the Sheriff was able to get a lead on Jack and Mia’s whereabouts from Tony just as he was being put into an ambulance.

Ralph must have driven like a mad man to get to Jack, and purposely drove his brother’s car off the rode to cut them off and take Hauser into custody.

This entire investigation also served the purpose of bringing both Jack and Mia, and Ralph and Katherine back together before what will absolutely be a contentious final two episodes.  It was rather sweet to watch Mia run into Jack’s arms upon his safe return.

Previous to the manhunt, Savino and his boys had been plotting how to make the best of their situation, having to run the Tumbleweed for mining big shot Porter Gainsley.  He as well as his lawyer had been growing suspicious of Savino’s business practices, and increasingly unhappy with how things were going.  So what better for Savino, to solve all of his problems, but anonymously tip off the FBI to Gainsley’s own trouble — using money meant for victims of a mining accident to fund the casino?  Though the set-up seemed somewhat background in this episode, after the extended preview for the show’s final episodes, this is definitely an important plot point.

Though it seemed Dixon and Yvonne’s sub-lot was rather irrelevant, I have a feeling it set-up what will be the over-arching theme of the season’s finale.  For the couple, Yvonne’s ethnicity became a concern when Dixon wanted to take her to a movie.  Dixon seemed rather un-phased by the “Colored Entrance,” not even realizing that it was an issue, but Yvonne was so put-off by the complication that she very nearly walked away from their relationship.  Ralph didn’t let Dixon let that stop them though, and proposed that only a certain kind of man would let their differences get in the way.  Dixon proved himself to Yvonne by finding an officiant for the wedding of a man being held at the station and his fiancÃ© after dragging his feet for the whole episode, and showed her that he knows when something is worth fighting for.

The great thing about Vegas is that each episode can stand on its own, yet at the same time be so subtly and effectively be setting up larger conflict.  Not to mention the fact that the characters are wonderfully unique while not different enough to clash.  This is certainly a show that I would watch in marathon, if only to appreciate the hints that were surely lying in wait earlier in the season for what is happening now.

And of course, who doesn’t love sassy Sheriff Ralph Lamb?  His having FBI vehicles towed out of spite was one of the great moments in this episode.

If you missed tonight’s episode, I highly suggest watching it before the final two episodes of the season.