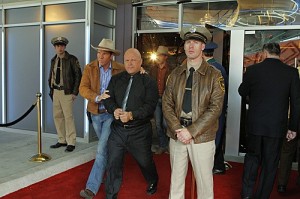 While last week saw Lamb and Savino on the same side of a crime — kind of — Tuesday night’s Vegas had Sheriff Lamb in the position of having to actually protect Vincent Savino.

Remember back a couple of episodes, when Savino’s boys buried Davey Cornaro’s body in a field?  Well, when we walk into the episode, two farmers are moving through their fields, and come across a patch of deadened soil.  Thinking it’s likely due to a dead animal, they proceed to dig, however, the find a body.

And cue the source of the episode’s conflict.  That…plus the fact that our mysterious hit-man Jones is back in Las Vegas.

While the Sheriff is beginning his investigation into Cornaro’s murder, Savino is busy reaming out his associates for thinking that burying a body on a farm, where soil is constantly turned over, would be a good idea.  However, Borelli is missing from the little meeting, outside reading the paper.  Unfortunately for him, Jones is waiting with a gun and takes him out, plus an older woman, Marjorie Dobbs, who happened to witness the shot.

As usual, Savino is Lamb’s first suspect, and in the case of Borelli and Mrs. Dobbs, Lamb is particularly determined to get Savino to spill what he knows, even going so far as implying that the old woman’s murder is his fault.  In an odd twist of circumstance, Savino is visibly shaken by Borelli’s death, and upset, though he refuses to crack to Lamb’s pressure.  And the Sheriff being the Sheriff, closes down The Savoy.

Cut to Chicago, where Johnny Rizzo explains the Vegas situation to boss Angelo.  Though a very short scene, Rizzo’s urge to get rid of Savino screams “uh oh!”  The mobsters take a trip back to the strip to get a look at The Savoy, and to explain to Savino that Milwaukee has nothing to lose in Vegas, thus they’re highly likely to come after them, and now Chicago has to let the Tumbleweed go and fix what Savino broke.

As if things weren’t tense enough, Jones dares to show his face in The Savoy again, no doubt out for Savino’s blood.  The man poses as a carpet salesman to one of the stationed officers, completely prepared with a briefcase full of samples, and gets past the guard.  Upstairs, Savino and his boys are trying to figure out what to do, but are interrupted by gunshots fired by Jones when another officer follows him through the back halls of the casino.  Jones gets a shot off on the officer and Savino takes off after him, getting in a shot of his own, but he pauses when he comes across the wounded officer to try and save his life.  Of course, none of this actually work’s in Savino’s favor, as the Sheriff take him into custody — for punishment or protection…well, the definition is a bit blurry.

The episode hits the turning point when Jones, as he listens to the radio in the middle of mending his own bullet wound, calls the Sheriff’s station, this time posing as a county clerk to find out the conditions of Savino’s custody.  And of course, the officer on the phone lets it slip that it’s for his own protection, overseen by the Sheriff himself.  After Katherine mentions that she had explained the situation to everyone at the county clerk’s office, Jack figures out that it was Jones who made that call and leaps into action to stop Jones’ hunt for Savino.

Though all of this happens as Sheriff Lamb serves a handcuffed Savino a steak dinner — sans knife.  The two seem to be getting along until Savino starts probing into Lambs past, asking questions about his service in Europe and his wife.  The mobster just can’t stop poking at the wound, even after Lamb offers that his wife had died in a car accident, and even goes so far as implying that had Lamb taken leave from the service, maybe his wife would still be alive.

Jones interrupts their little meal, and this time he brought back-up.  The hit-man’s hunt for Savino leads into a full blown shootout on Lamb’s property.  Somehow, while the Sheriff is busy taking on the boys from Milwaukee, Savino manages to escape his shackle to the kitchen table, and gets a shot off on Jones just as Lamb tackles him to the ground.

It would seem that Savino’s Milwaukee troubles are over after the lawmen take Jones and his boys away, but he’s caught off guard when Angelo and Johnny Rizzo come around to discuss the still-relevant issue of the Tumbleweed.  The two take Savino to a dark stretch of road, and the conversation coupled with Rizzo’s carrying of a gun and shovel lead right up to the moment when a shot to Savino expected, complete with Vincent’s own plead to be buried deep.  But it only takes a split second for Rizzo to turn, taking out Angelo instead.  Almost as if nothing happened, Savino asks if the action was OK’d by Chicago — the answer is yes, and apparently Johnny Rizzo is taking over.

Hopefully I wasn’t the only one caught surprised by the shocking ending (even just a little bit).  This episode of Vegas almost felt like a movie — there was no lack of conflict (is there ever on this show?), drops of humor, and all the appropriate subtleties of the different relationships featured on the show.  I particularly liked the way the writing has evolved to include the tension between Jack Lamb and Mia Rizzo, highlighted this week by his concern for her safety in Vegas, and the evident concern that Savino and his wife have for each other.

It goes without saying that this was a huge episode for Sheriff Ralph Lamb’s backstory.  The first hint of any sort of emotion occurred right in the station, his place of work.  When Marjorie Dobbs’ husband arrived, stunned at the news of his beloved wife’s death, Ralph just could not face him, or even form complete sentences of condolences.  Though small, the moment re-introduced the man’s ever-present mourning, and further fed the tension of the dinner scene, and his hesitation to share the story of her passing.  Now, I’m not entirely convinced that a car accident is the true story behind Lamb’s wife’s death, but I am completely in love with the implication — Ralph Lamb, tough as nails rancher-turned-sheriff, has a massive soft spot for his family and adores his late-wife.

It’s the little things that are making Vegas such an interesting show to watch.  It’s understood that each case will be dramatic and twisted, but the supporting storylines feed the way the characters handle those larger issues.  Overall, “Bad Seeds” was a great episode that brings up even more possibilities for friction between the law and the mob.