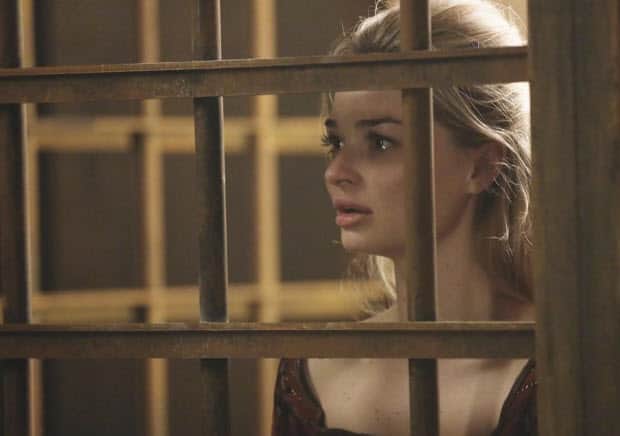 As we are getting closer and closer to the end of Once Upon a Time in Wonderland’s first (and most likely its final) season, things that used to annoy us a lot have changed for the better. If you have been with us this whole season, you know at this point that the Red Queen was someone that I had a lot of problems with because it was so difficult buying her as a powerful villain. However, ever since they started to show that she used to be a good person a long time ago, I started feeling more for that character.

It had been teased in early interviews for the show that a certain queen of hearts would possibly be showing up on this show in form of flashbacks. While she was one of the most ruthless characters on Once Upon a Time, Cora was without doubt one of the strongest villains on that show and it’s because of Barbara Hershey. There is still that part of me that wished that Cora hadn’t died on the original show and instead could have become the villain for this show.

We would have preferred that better instead of having the Red Queen, who could had been an alley to Alice as Anastasia. The origin of how Anastasia became the woman that we saw in the first couple of episodes made so much sense. Having Cora being the one to lead her into anger and hatred was a brilliant setup and it resembles in a way what Rumplestiltskin did to Regina on the original series.

Even Cora’s effect on Knave was something that we enjoyed quite a lot and it gave us a lot of character background of Knave. The thing that made those flashbacks more compelling was to see the connection that it had in the present. It was heartbreaking seeing Knave getting his heart back and basically regaining all those feelings that he had before Cora took it out. But what followed was even worse as Knave had to see Jafar kill Anastasia and at the same time feel pain as he saw the woman he loved, die. Now they could surprise us next week by throwing a twist or two at us, but I wouldn’t be surprised if that was actually it for Anastasia.

We got to see Alice and Cyrus visit Storybrooke and while it was hilarious to watch their reaction to modern technology, it would have been great if they had bumped into any of the Once characters. I have no idea if we will get to see these characters on the original series after episode 13 of this show so it would have been great to have had at least one interaction. But we can’t always get what we want.

The scene between Jafar against Alice and Cyrus surprised us a lot as things that we didn’t expect to happen, did in fact happen. Jafar’s staff (with Cyrus’s mom inside) started to think on its own and didn’t obey Jafar which ended up giving Cyrus the upper hand. For someone who loved Jafar in the Aladdin movies, it’s hard to imagine a Jafar without his iconic staff. It’s safe to say that this confrontation was just the beginning as we are getting closer and closer to the final war.

Overall, “Heart of the Matter” was a strong episode and with only two episodes left, I can’t wait to see how this will end.

Once Upon a Time in Wonderland airs on Thursday nights, 8/7c on ABC.