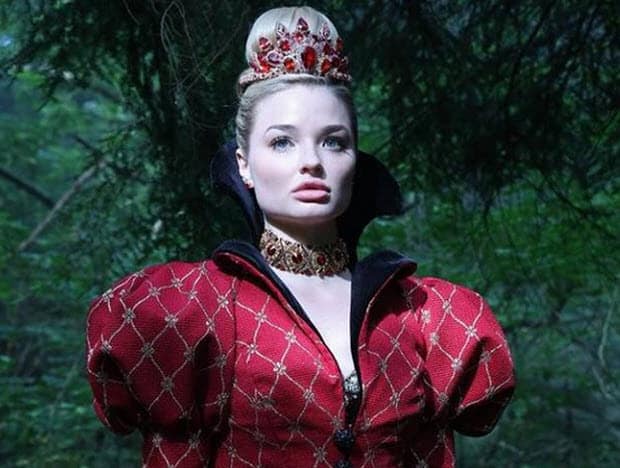 (In order to avoid repeating what has been said in previous reviews, let’s just skip the topic of the poor CGI effects in Once Upon a Time in Wonderland. It’s become a given at this point.)

This episode explored more of the Red Queen’s backstory that actually had a pretty great start because it was made apparent she wasn’t living such a good life before she became a queen. But then the writers decided to speed up the pacing way too much and this part of the episode became disappointing. While it’s understandable that with only 13 episodes, they have to be able to tell the stories, but they still didn’t have to take so many steps forward. It was bothersome that Anastasia became queen just like that after having pretended to be a different person at a ball as well as trying to steal valuable items from the King.

They could have explored much more with this flashback as it was Anastasia’s and Knave’s first time in Wonderland. It just didn’t make sense and made the King look like an idiot. His reasoning that he has been searching for a queen for a long time makes sense, but it’s odd why he would decide to pick her. Maybe there is more to it, but at this point, the Anastasia backstory has very little promise. Hopefully there will be more focus on Knave’s background in these flashbacks.

Surprisingly, what was presented by the Red Queen in the present was actually impressive for once. While there is still room for improvement, Rigby did actually step up this week and felt a bit more intimidating which was expected out of this character from the beginning.

While it didn’t make Alice look stupid for trying to work with the Red Queen, it did show once again why she is a hero. She wanted to find a little hope inside of the Red Queen, or perhaps to put it in better terms, a little bit of Anastasia. The sequence with the young twisted Alice was incredibly thrilling and it’s always fun to see a classic Disney character in a wicked version while still looking a bit like the kid friendly variant.

Jafar continues to be the more powerful antagonist of the series as he shows how ruthless he is. While it was horrifying to see him cut a foot off the White Rabbit, how cruel and extreme can a show like Wonderland be at an 8 PM timeslot? Good thing that there wasn’t any blood coming out of the leg because there are likely a lot of kids watching the show.

It’s nice to see that the White Rabbit is really not turning on Alice at all, but is simply forced to work with the villains. It definitely helped when he decided to let Cyrus go without telling Jafar.

Speaking of the genie, it was nice to see him finally get free, but who was that other prisoner? For a second, there was a thought that perhaps this could have been another genie. Brian George is a very good actor and it’s a shame that they didn’t do much with him, but there is always the chance that they may expand on his character later this season. Surely there has to be a reason why he was in that cage next to Cyrus this whole time, right? With eight episodes left, it’s most likely a safe bet that it will be about Cyrus and Alice finding each other, the question is how long will it take? It would be nice if this arc could go on for at least three episodes because it would be too easy if they found each other next week.

Overall, aside from a few flaws, “Heart of Stone” was a good episode that is definitely moving the show forward. While there are still things that need to be improved, this is a pretty good show. It will be interesting to see what these next couple of episodes has in store for the audience.