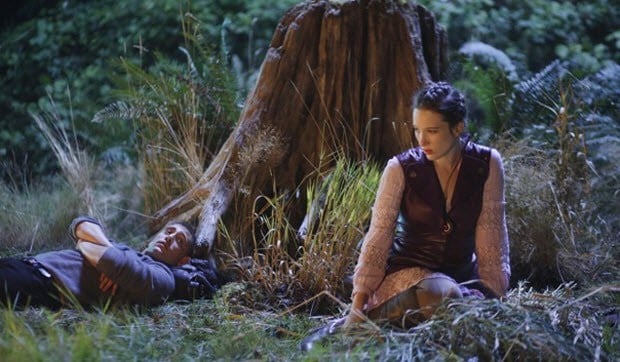 As someone who has genuinely enjoyed this series since the first episode, it’s sad that we are getting to the end. But on a positive note, the penultimate episode of Once Upon a Time in Wonderland was definitely as good as I had hoped it to be.

There were a lot of payoffs in this story, especially with the flashback to the first meeting between Alice and Knave. That aspect was so much fun to follow because in a way, it feels like I forgot to ask the series about how they actually met because of everything that has been going on this season. It was fun to see an Alice who wasn’t the one that we see today, when it comes to the fighting stuff.

While it remains to be seen if she actually comes back to life or not, I’m not sure if they really should revive the Red Queen. It will take away the huge effect that it had last week when Jafar, unexpectedly, killed her. But we will have to wait and see next week what happens to her.

We haven’t really commented much on the Jabberwocky for the past couple of weeks, it’s not because she hasn’t been an interesting character, but she has never really been on our minds too much. However, this week, I felt that I noticed her a lot more and she was a lot more interesting than previously.

Instead of just being Jafar’s slave, she actually started to feel like her own character as she did help the gang. Something that needs to be pointed out is the phenomenal theme that she has, whenever she is in a scene because it just fits with how she acts, moves and looks. They have definitely succeeded in making this character as scary as she is supposed to be.

The confrontation between Amara and Jafar was more thrilling than we expected at first and I enjoyed seeing Jafar for once in a long time, getting shaken up a bit. For the past couple of episodes, everything has almost gone perfectly for him as he has been able to put piece after piece together in his game.

However, there was one part that was a bit disappointing and almost too predictable and that was that Jafar had to injure Cyrus in order to get Amara on his side. Why does there always have to be one character that isn’t careful enough in a situation like this? We are sure that Cyrus isn’t dead yet and that he will somehow make it through in next week’s episode, but it was just so irritating. We got a good cliffhanger which is basically Jafar and Amara beginning to change the laws of magic and we can’t wait to see how our heroes will do.

Overall, as a penultimate episode to a show that is sadly ending way too early, “To Catch a Thief” was a satisfying episode. The theme was mostly “payoffs” to several story aspects that we have seen throughout the whole season. It was also one of the better episodes of Wonderland, if you look at it as a normal episode rather than a penultimate episode.

If you didn’t catch the 20 second promo that aired last night, we should let you know that the trailer confirmed that the series isn’t coming back for a second season as the narrator and the image itself says “series finale”.

It’s disappointing for sure and while this is mostly ABC’s fault because they put in on the wrong night, it’s good that they (as in the show) have been able to (supposedly) write a finale that will wrap the series up.

Don’t miss the series finale of Once Upon a Time in Wonderland, titled “And They Lived” next Thursday, 8/7c on ABC.