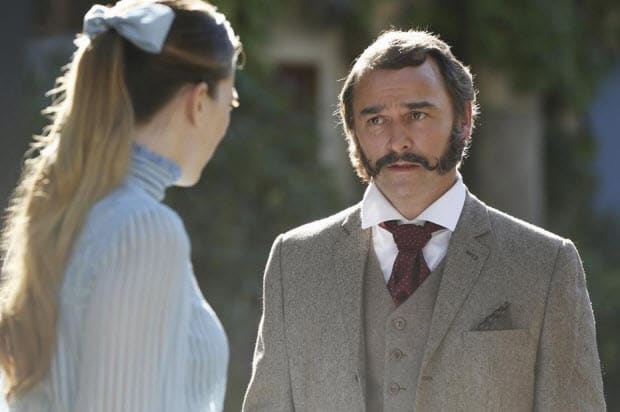 Why does every stepmother in any fiction, whether it’s TV, film or a book, have to be so evil? This episode explored Alice’s year before she went to the asylum, it’s one of the most interesting aspects of the show because it’s such a darker take on the Alice story.

To see that her father had moved on was heartbreaking to watch and seeing how much she was struggling with adjusting to this new life was painful to watch. The actress who portrayed her stepmother was just like any other fictional stepmother, evil and hateable.

The twist at the end of the episode where Jafar went to Alice’s father and from that hint, it looks like he will be taking him to Wonderland. That was really intriguing and quite unexpected as it was speculated that her father wouldn’t play that big of a role in the present on the show. It raises the stakes of the show which is undeniably a good thing.

It was disturbing to watch the sequences in Boro Grove which was the point the writers were trying to make. It’s interesting how dark they were able to make that despite the fact that anyone went in there just ended up forgetting who they were and became “happy.”

One great character development in this episode is Knave of Hearts and the revelation that he took out his own heart because of Anastasia. It explains a lot about the way he is and it was nice that he got to save Alice in a difficult situation.

Sophie Lowe got the chance to portray three different versions of her character which was showed more of her amazing acting ability. It can’t be stressed enough that she is one of the breakout stars of this season because of her interpretation of Alice. While the asylum was incredibly creepy in the pilot, it would nice to see what Alice was like during first days there.

She really got show a lot of different sides of Alice in this episode and showing the viewers the complex life that she has lived. That is a combination of strong writing and acting which is why it would be a shame if this show was to go away.

While it wasn’t the most interesting thing in the episode, it was good to see Cyrus on the run and managing to trick those guards with the footsteps. While he was able to escape them, sadly the queen was able to track him down and reveal to the viewers that they were in fact on a floating island. That was also a nice surprise because it didn’t look like it was a floating island from Alice’s point of view last week.

Surprisingly, the special effects were actually convincing this week as there was barely anything to complain about. Although there was a lot of forest scenes and a good portion of the episode was in Victorian England.

That gave them a reason to feature less special effects scenes. But everything did look good from the floating island to Boro Grove and if they have a balance like this in their production as well as writing, there will definitely not be as many complaints about that aspect of the show. Maybe these next couple of episodes has actually already got to that point and perhaps ABC did give them a little budget boost.

Overall, “Who’s Alice” was a solid episode that continues to drive the stories forward and over the course of these six episodes, they have been to tell so much about these characters.

It’s so far one of the series best special effects looking episodes and hopefully the quality will be like this for the rest of the season. After seeing the trailer for the next episode, hopefully these two weeks will go really fast because it looks like the show is about to get to a whole new level.

Once Upon a Time in Wonderland will return on December 5 with episode 7, “Bad Blood”, 8/7c on ABC.