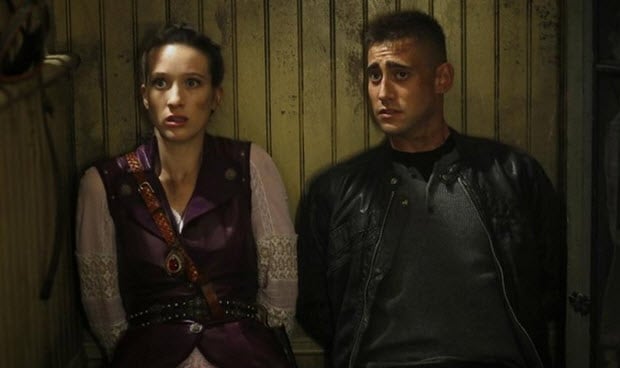 I can’t stress enough how amazing Wonderland has been so far with its great cast and interesting storylines. But when I was watching this episode, I saw once again the one thing that could potentially make people tune out, one of the show’s most important factors: the visual effects.

The thing that is frustrating with this show is that they are always so close of making it look completely ridiculous, while at certain points it does indeed look like the land that you fantasize about when imagining Wonderland.

I may be overreacting, but I could very well see viewers tuning out because they will look at certain scenes in this series and think that “oh that’s just actors working with a green screen.” Whenever you are making a fantasy television show or movie, the most important aspect is the visuals.

If you are working with a lot of CGI, special effects and green/blue screens, then you have to make sure it looks believable. Otherwise, you’re going to have a problem and Wonderland can’t afford having this issue for long.

Let’s also remember it is already facing the challenge of being in the Thursday 8 PM slot, which is up against shows like The Big Bang Theory. Hopefully this will be another reason for ABC to just have this series be a 13-episode show. I’m not sure if the budget for this show has what it takes to make 22 visually convincing episodes.

This episode featured flashbacks to the Knave of Hearts’ backstory and we learn that his name is actually Will Scarlet as he was a member of Robin Hood’s Merry Men. I’m still trying to understand this whole Knave of Hearts situation due to the fact that in Once Upon a Time, we see an older version of this character.

For some reason this young version doesn’t seem to be time traveling at all. It makes me wonder if this is perhaps a completely different character that possibly became the next Knave of Hearts at some point.

The biggest twist in the episode was the revelation that the Red Queen was Anastasia, Will’s love. If it hadn’t been for that bed scene at the beginning, I wouldn’t have seen this coming at all. I’m still not completely sold on Rigby’s take on the villain, but there is a chance that with this revelation that she used to be a good person that later on went bad, she may convince me.

Lowe is continuing to impress me week after week and it’s mainly because of her that I’m so captured by this show. I think out of all the live-action Alice interpretations, that Lowe’s version is the most compelling. It may have to do with the fact that the Wonderland show is taking a bit more of an adult take on the story so therefore, Alice automatically is a more mature and strong character.

It’s also her relationship with Knave that makes this show so fun to watch every week and a lot of it lies in their chemistry on screen. I still enjoy Cyrus and the relationship that we see getting established in the past, but we are getting more development between Alice and Knave so I care more about that relationship as well.

I like the fact that they discovered that the White Rabbit is working with the Red Queen and I think it’s going to be an interesting conflict because traditionally, we have only seen Alice and the White Rabbit as allies.

Out of the two villains we have, Jafar is still the best one and he is increasingly becoming more intimidating as the show progresses. He really captures the right tone of being an antagonist while the Red Queen is still — sadly — coming off as a mean girl that you usually see in high school movies.

“Forget Me Not” was overall, aside from my issues with it, a great episode that continues this fascinating story. Hopefully the visuals won’t continue to be annoying as they have been for the past two weeks for Wonderland.

Once Upon a Time in Wonderland airs every Thursday night, 8 PM on ABC.