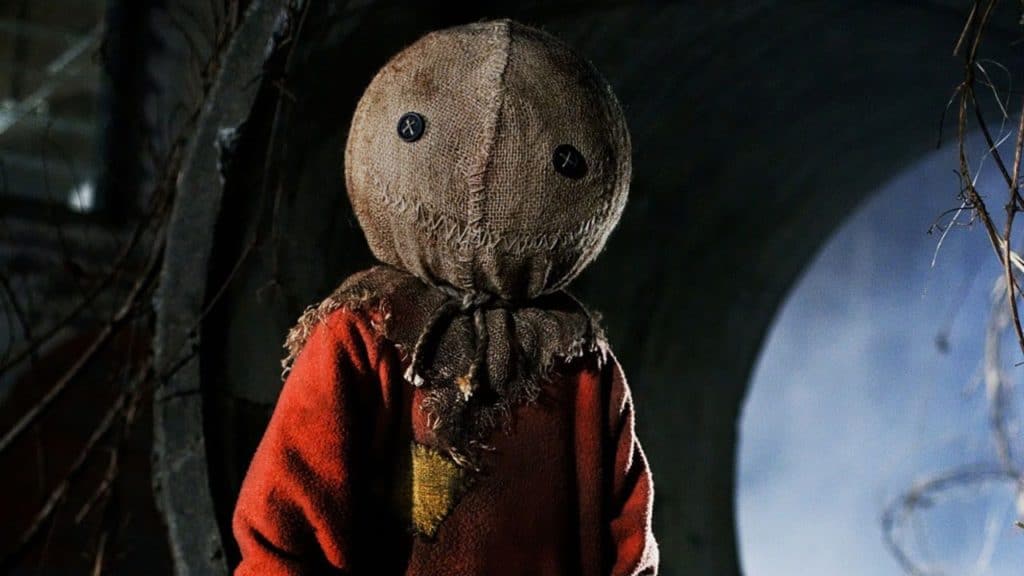 There are several Halloween movies out there that are bound to make people think twice about going trick or treating these days, especially when it would appear that some folks are scared of their own shadow. In a movie like this that would probably be wise though since the whole idea is that there’s a threat everywhere as the movie provides an anthology of tales that all join together at one point as the key elements interact briefly with one another in some cases, or are intertwined in others. From the trailer, it becomes evident that it might be the type of horror movie that sees fit to include some of the more popular urban legends such as razor blades in the candy and other bits of legend and myth that some people still believe in when it comes to Halloween. The myths and legends of the bygone era from which Halloween originated have been so twisted and warped over the years that trying to discern fact from fiction and real belief from absolute myth has become rather difficult, which is a pity since this time of year was originally something that didn’t have as much to do with sweets and had more to do with the harvest and legends that were actually interesting.

But Trick R Treat instills a new bout of beliefs that it dredges up from the murky depths so that it can scare the living hell out of the audience in a campy, creepy way that some folks might think is a little much when it comes to being truly scary, but others would agree is a lot of fun since it doesn’t get too serious and it doesn’t go full comedy at any given time. The stories that are told in this movie are actually quite interesting since it gives a slightly new look at a couple of horror tropes and utilizes a few very well-respected actors that make each tale just a little better. Dylan Baker plays the part of Principal Steven Wilkins, who right off the bat is super creepy since he has an air about him that speaks of super cringe, and it doesn’t help when he poisons a student in the open and then takes him into his home, where the student is eventually beheaded so that Steven’s son can turn it into a work of art as he creates a grotesque Jack o’ Lantern that kind of kicks things off in a way that one might not have expected.

Another story involves a school bus massacre that has to do with a bus driver chaining several special needs kids to their seats before sending them to their death by driving the bus into a quarry, where they sink, while the bus driver manages to escape. The story is moved forward as several school kids that received candy from Steven head to the quarry to trick another girl, Rhonda, who is said to be a savant and a Halloween traditionalist and is also teased quite often by her peers. When the kids attempt to scare Rhonda by dressing up as the deceased children of urban legend, whose parents apparently paid the bus driver to send them into the lake where they drowned, Rhonda rushes back to the elevator that was used to access the lake. The only problem is that once the prank is over, the real undead children arrive, and as the kids attempt to get Rhonda to let them into the elevator, she leaves them behind instead, allowing the kids to be ripped apart by the undead kids as their screams can be heard from above.

Upon reaching the top, this is where we really see a good view of Sam, the orange-clad, childlike creature with the burlap sack over his head, as he stares knowingly at Rhonda while allowing her to walk off, a lit pumpkin in the wagon she’s seen pulling earlier in the movie. From there the story continues, as Laurie, the youngest member of a group that has come to town to party tries out her costume with her older sister and her friends. As Laurie makes her way to the party, she is followed by a sinister character in a cape and cowl who manages to step in front of her at one point, at which time the camera cuts away. When next we see Laurie it’s after a beaten and battered Steven, who is wrapped in the same cowl and is wearing the same mask as Laurie’s attacker, is dumped from a tree into the middle of the party that her sister and friends are attending in the woods. When Laurie emerges from the shadows she appears a bit ruffled, but none the worse for wear. That’s when things get weird, since at that point it’s revealed that Laurie, her sister, and their friends are werewolves, and as they proceed to tear their skin off to reveal the hairy bodies beneath, Laurie reveals to Steven that this is her first time.

Oh, it ends on a high note as well, since Kreeg, the former bus driver, played by Brian Cox, is a paranoid shut-in that is confronted by Sam, the little guy that’s been running the story and is responsible for the first kill that occurs before we get to Steven. Sam and Kreeg have it out, but in the end, Sam leaves him alive for an unknown reason. Later, near the end of the movie, Kreeg is seen beaten and battered as he hands out candy to kids that come to his door. In the last scene, however, we see the zombified children that Kreeg sent to their deaths, and the credits begin to roll as the sounds of screaming and ripping flesh can be heard. Seriously, this is one of the better Halloween movies out there for the money, and it’s worth it since one can be terrified and still laugh about it at the same time.