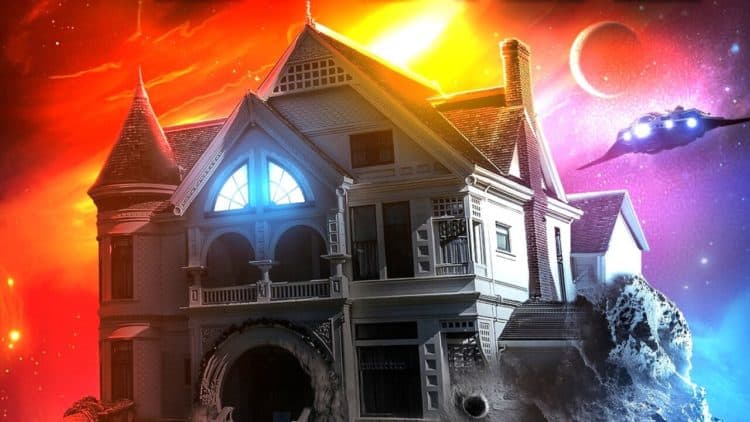 Space isn’t exactly a new frontier in the movies any longer, since plenty of movies have taken advantage of the ability to head off into the starry night and see what’s there to explore. This time around however it would appear that two of the most overused elements in the movies have been paired up to create something that’s bound to be…weird, to put it lightly. Space and the Amityville Horror are two things that just about anyone can make a movie about these days since both have are ideas that have been taken around the block a few dozen times. It’s a unique way to get rid of a problem that has existed for a while, but it’s kind of like tossing the trash in the ocean, one way or another it’s going to do harm no matter if it’s out of sight, out of mind to someone else. The only difference is that by tossing something into space it definitely feels as though it’s out of sight out of mind since the supposed infinite room that space offers is more than capable of swallowing up just about anything.

That’s the point, more or less, of this movie since apparently a way is found to banish the Amityville house since the evil that lurks within it has defeated just about every attempt to get rid of it over the years. But as one could imagine, a ship full of unsuspecting individuals would be a perfect way for the spirit, or spirits, in the house to have a little fun as the main point would be to confuse, abuse, and otherwise destroy those that sought to discover its secrets. The idea that a haunted house could be just as terrifying in space is kind of an odd thing to think about, but in a way, it’s like another derelict ship, an idea that’s been seen more than once, and has maintained a firm grasp on the supernatural as well as science fiction. Hey, Hellraiser: Bloodlines did it and made the idea work, but they did have a bigger budget and a firmer grasp on the premise than a low-budget movie could hope to achieve.

But all the same, it’s smart to give credit to movies that don’t have a serious budget to work with, and thinking that someone had the idea to put Amityville in space is interesting since it’s intriguing to find out how a person’s thought process works. There have been so many different versions of The Amityville Horror that it’s tough to think about which one might be the most definitive if any of them are. But taking the idea and placing it in an environment that is well beyond the norm for such a horror story is something that could go horribly wrong or turn out to be kind of quirky and maybe even a little inspired. Granted, the acting is bound to be terrible and the overall execution of the idea is probably going to be more laughable than anything, but it’s also a bit of inspiration for people who want to make movies and who want to eventually work up to something that might one day be great, or at least recognized beyond the internet.

It’s bound to happen that this won’t be what comes of this movie and that it will be another in a long line of low to no-budget movies that will be lumped in with a lot of similar movies that have come and gone over the years. Out of the many movies, like this one, that do their best to get noticed, there might be a handful that will be remembered for longer than a month or two, even by the superfans that profess to love the low-budget movies far more than anything else. The upside of these movies being made is that they do inspire others to come up with ideas that will be credited to them later on, and they’ll earn a spot in memory no matter how dim it becomes. But talking more about the movie, it does make a person wonder if this was an idea that came about naturally or if it took a bit of something extra to get it made.

Hey, it’s fair to wonder if an intoxicant is responsible for one idea or another, especially in this day and age when so many cookie-cutter ideas are brought out when a person is stone sober. That’s why this movie was intriguing enough to write about though because it’s another movie that’s not necessarily punching up to try and gain attention, but it is another movie that’s doing what it can to simply make a mark and come up with something that people might not have seen over and over. It’s a goofy idea to be certain, but it’s still one that might be worth watching at least once.