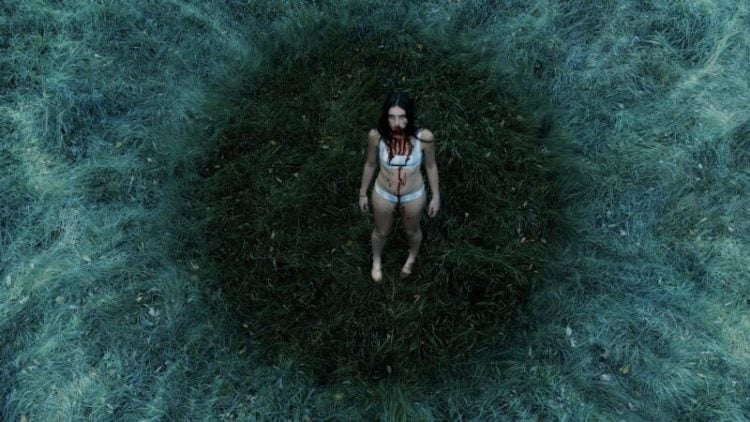 What sounded like a startling and unpredictable movie, to begin with, has become something of a strange but enticing story that bears looking into for those that haven’t seen it yet. Spoilers are coming, so if you haven’t visited Shudder to take a look yet, it might be wise to do so, or simply read on. The movie is one of those that appeared a little odd during the trailer, but at the same time sparked the interest of many viewers that have likely watched it by now. Those that practice witchcraft might have something to say about this movie, but one thing that anyone can say is that this isn’t quite like The Craft or the Paranormal Activity movies, meaning that it’s not taking a look at witchcraft from a standpoint that’s far more cinematic. It might not be a perfect movie, but it feels much more personal and not as stylized as many other movies have been over the years. It also doesn’t use the same types of effects that have been seen in other movies, which makes it a little more appealing since the simplicity of it creates a story that’s easier to pay attention to.

The story begins with Izzy and Mother, a daughter and mother that live together in the woods, where they create heavy metal music and remain apart from civilization. Their lives are simple enough since they want for anything, but it’s clear that Mother doesn’t want Izzy mingling with those in the town that she heads to for their supplies, even if the reason isn’t certain. Mother tells Izzy that she can’t be around people because she’s sick, but this explanation is kind of hard to take even though Izzy does look slightly less than healthy. Their diet typically consists of items that are found in the forest, which looks a little disgusting but apparently sustains them.

Life for the two of them, but there are signs that Mother worries incessantly about Izzy since she creates what appears to be a manner of keeping an eye on her daughter when they’re not together, and ends up spotting a male hiker that comes across Izzy after he gets lost. While the man is nice enough he does ask several questions, and when Mother comes upon the two of them she motions for Izzy to go home while she then walks with the man off of their property before she asks him if he has a wife or children. When he replies no, Mother immobilizes him and then turns the man to dust. That should give people a pretty good indication that Mother is more than a little powerful since her craft is fairly strong, though she doesn’t use it that often in the movie. One thing that might be seen as troubling is a book that she keeps magically locked away, as it gives her visions of what might come to pass in a very disturbing manner that leaves her wondering about the future. Of course, one should have been able to guess that Izzy would grow curious about the outside world that her Mother denies her so often, and it happens that after the encounter with the man, she goes wandering in the woods.

Coming upon a house set on the edge of the woods, Izzy meets Amber, a local teen, and swims with her for a bit in the pool that’s a part of the home. Stealing Amber’s berets, Izzy then agrees to return eventually. When she does return, she meets two of Amber’s friends and takes a shot of tequila with a worm in it, as one of the friends had the odd idea to celebrate in this manner. When Izzy swallows the worm, however, something strange happens as she howls in what sounds like a cry of pain, or horror, or perhaps an awakening, and then begins to react oddly shortly after. When the owner of the home returns and drives the teens off, Amber and Izzy are out walking in the woods alone when Izzy starts acting oddly. Amber storms off, leaving Izzy on her own as she returns home. Izzy’s behavior continues to change as she finds her mother’s book, and learns from her mother why she felt different when she ate the worm.

From that moment on her mother begins to teach her what it means to be a hellbender, and why she didn’t allow her to mingle with the townsfolk. It also turns out that her mother is well over a century old, which explains why older people in town recognize her. But Mother makes it clear to Izzy or tries to, that being a hellbender isn’t the kind of life she needs to embrace. As Izzy falls deeper and deeper into the magic, however, the rift between her and Mother continues to grow, until finally, Mother finds Izzy’s secret area beneath the house, where she’s been stashing bodies, and consuming them. She finds Amber and realizes what her daughter has become. The movie ends not long after Izzy reveals that she’s now more powerful than her mother, and is heading into town to pick up a few things, which was her mother’s job. The movie isn’t exactly hard to understand since it’s pretty straightforward, but it’s definitely creepy and quite solid in its message.