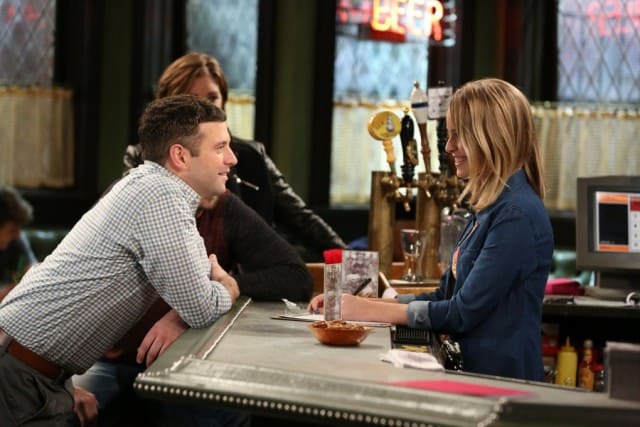 Admittedly, I had hesitations about Undateable‘s shift to a live format. While both the spring finale and fall premieres were entertaining, their reliance on the gimmick of their presentation sometimes came at the cost of developing its stories in more satisfying ways. The big story beats were there, but felt secondary to the show embracing its ‘liveness’ – which is all well and good, but also somewhat took away what Undateable such a great show in its sophomore season, which dug a little bit deeper in exploring the professional and personal lives of the Black Eyes Bar crew in wildly satisfying ways.

“A Rock and Hard Place Walk Into a Bar” really feels like the first episode of the ‘new’ Undateable, melding the storytelling rhythms of old with the show’s new live stylings to produce a hilarious half hour with just enough story to keep things moving. It’s basically the stories of Season 2 – that is, everything circulates around Danny’s sloth-paced maturation – with a new, energetic (and very meta) delivery, and although that’s doesn’t quite fit the traditional definition of “evolution,” how these stories are told makes it feel like Undateable is continuing to push forward.

What it does fit is the definition of quality comedy television. “A Rock and Hard Place” puts on full display the comedic talents of its central cast, opening with Shelly noticing himself on television and carrying through a number of great gags, like Scrubs cameos (Bill Lawrence, Robert Maschio, and Sarah Clarke all appear), Grease singalongs, and a classic Danny/Justin fight scene, where they do battle with their metaphors, bowing to each other peacefully after exchanging “blows.” No, the cast members aren’t the greatest at keeping straight faces or delivering every single line on time, but in a way, Undateable‘s turned this into its charm, willing to let actors drop name references and play to the audience in a way that feels energetic and infectious, but never forced.

That balance is extremely hard to find – just go watch modern episodes of Saturday Night Live if you don’t believe me – and Undateable has surprisingly made the transition feel natural, relying on cast chemistry and the simple, but strong narratives about characters dealing with their own transition from young adult to actual, somewhat responsible human beings (save for Brett and his dirty ice cream eating). With those important cornerstones of personality still in place, it’s no surprise Undateable has gone live with such relative ease, and if it can keep delivering episodes like “A Rock and Hard Place,” there’s no reason it can’t keep working for weeks (and hopefully seasons) to come.