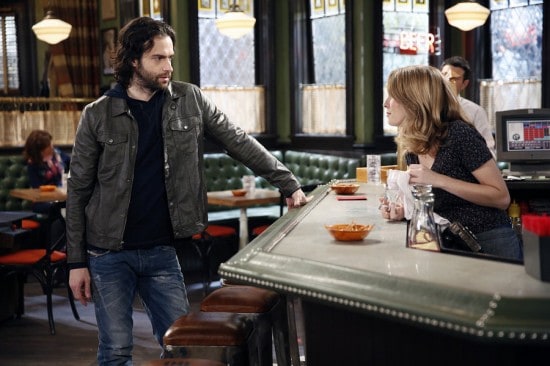 To see Undateable‘s larger aspirations in its second season, look no further than the evolution of Danny Burton. The man hasn’t had a random woman in his bedroom in weeks, and instead of his braggadocio being played off as natural, Season 2 of NBC’s only comedy (I said it!) has explored the underbelly of Danny’s ego, the damaged, insecure man-child whose mind has never matured beyond 15. “A Priest Walks Into A Bar” is the latest step in building Danny 2.0, an episode that takes a longer, harder look at his personal ambitions than anyone might expect out of a show so light-hearted.

The first act of “A Priest Walks Into A Bar” is a great disguise for the deeper explorations of Danny to come later – and even a great ruse to build towards the episode’s second act, which reinforces just how adorable the friendship between him and Justin is (“There was never any fuzz there” is the night’s funniest line, by far). “Priest” opens with such a loose, improvisational feel, it doesn’t feel like there’s much plot to work with, especially after the B-plot is revealed to be about Shelley and a booty call, which is funny, because Ron Funkles exists, but doesn’t really do much to enhance Shelley’s character, or supplement the stronger material of the episode’s A-story.

However, as Justin gets forced by Leslie to give Danny some “tough love,” “Priest” slowly evolves into another step in the Great Maturation of Danny Burton, convincing him that maybe he should have a little hope in the world, and in himself. As funny as the reveal of his job as a pizza “transporter” is, it’s a telling bit of information about Danny’s character, a man who never really had any ambitions, dooming himself to a dead-end job simply because he assumed it was the end destination for everyone. Suddenly, “Priest” begins to inform Danny’s emotional state, with the subtle touches of his humorous deflections of serious topics, and his insistent need to make everything into a joke or a conversation about himself. Desperate to prove himself, Danny’s also afraid to be himself, afraid that he’ll inevitably disappoint everyone.

That insecurity is important: it connects the bridge between him and Justin, paving the way for the latter to guide the former, a great step for the show’s core relationship. We’ve seen plenty of Danny’s attempts to upgrade Justin into a better (aka less annoying) version of himself; “Priest” suggests that Justin has something to offer Danny in that department as well, strengthening the friendship between the pair. It’s too bad the show used Shelley’s silly story to deflect attention from the more serious aspects at play in Danny’s story: without them, “Priest” is still a pretty satisfying story, both in terms of how it catalyzes important changes with characters, and with the comedic beats it uses to emphasize these (Danny’s fuzz trick, the Ghost homage, Danny’s celebratory air kicks).

Undateable might feel like barely-scripted comedy, but there’s subtle touches of nuance built around each extended improv bit and follow-the-dots story lines. Undateable isn’t trying to revolutionize television, nor should it try to. “Priest” is a fantastic example of why: although it doesn’t reach for any large emotional conclusions, there’s no denying the satisfaction of watching Danny celebrate an important step forward in his adult life by kicking the air, Van Damme style – and when a lighthearted comedy like Undateable can achieve that emotion, it shows that it’s operating on a deeper level than most shows of its kind ever even attempt to (if you don’t believe me, just watch the train wreck that’s been following it in recent weeks, and see what happens when that care isn’t there in the script or the performances).