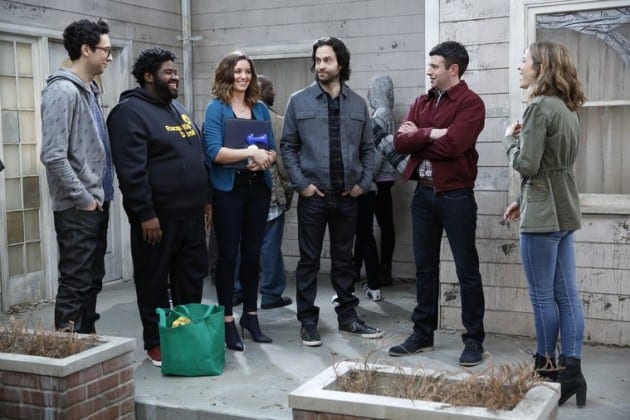 On the heels of the announcement that Undateable‘s third season would consist of nothing but live episodes, “An Angry Judge Walks Into a Bar” and “Cop Number Four Walks Into a Bar” both feel like previews of what those episodes are going to look like on a weekly basis, meshing some of the live elements of last week’s episode with some heightened, exaggerated forms of the show’s normal comedic rhythms and stories. While the finale’s lack of resolution feels a bit shoe-horned into the proceedings, leaving a number of characters and stories up in the air, “An Angry Judge” and “Cop Number Four” pave a neat pathway for Undateable to transition into its third season with the cast’s energetic performances (as always, led by Chris D’Elia).

One thing I hope Undateable doesn’t lose in its third season – which looks to up the ante on the lighthearted, loose feel of usual episodes – are the characters it developed so well during this brief second season. Danny’s maturity and Candace’s search to find her path are two insanely strong story threads I hope the show hangs onto next year. Moments like Candace’s monologue about owning a home after growing up homeless and finally getting a new start are emotional centerpieces that elevate Undateable above the typical weightless hangout comedy: it’s a light touch, but exists to give definition to a character in a way most single-camera comedies don’t even attempt.

With any luck, Undateable will hold onto those tenants. Season 2’s strongest storyline came in the form of Danny’s slow maturity, which takes another step when he helps Candace win the house in Leslie’s contest (another fun subplot this season: Leslie organizing various events around Detroit to help the city). I don’t need major, sweeping declarations of growth and self-importance from Danny or Justin, but when Undateable allows the events of the episode to form moments of progress around their leads, it brings even the most one-dimensional stories to life. The last two episodes of this second season don’t necessarily approach these ideas as consistently as previous ones in either season have, but in the heightened reality of Undateable‘s transitional season finale, the fact they still rise to the surface brings promise that they won’t be lost next season.

There are still moments where these two episodes struggle, however; acting as a season finale, both of these episodes have to rush through a new romance for Justin in order to establish the emotional conflict between him and Candace it ends the season on. This romantic story is pleasant and is given great context when Leslie talks to Candace about embracing the opportunities we have in life to make emotional connections, but it feels dissonant among the backdrop of Shelley’s goofy racial humor, Danny’s showboating, and the most touching story of the episode, Brent’s decision to come out to his mates back in England. The latter of these is barely given its due in the second episode, and it makes a lot of “Cop Number Four” feel a bit rushed: there’s more moving parts than usual around the episode’s central story, and the disconnect between locations and tone both hold the episode back from reaching its potential.

Undateable‘s Season 2 finally still leaves us with a fun (if predictable) little image, when a smitten Candace finally embraces her opportunity and kisses Justin (“Justin-time,” one might say?), ringing back to her conversation with Danny, when she talks about just wanting a man who’d open a door for her (Trent gets a nice exit, though: “Started at the bottom, now we’re HOUSE!”). The callback to that moment (and the song she performs in the previous episode), although openly telegraphed, is still a goosebump-inducing moment for the show, still an unexpected reaction while watching something so formless and bare bones as Undateable is. Yet it’s that abstract backdrop that works to the benefit of moments like this: when Undateable goes for high emotion, it stands out in stark contrast from the rest of the show – an aspect that certainly has its drawbacks, but often proves to be more beneficial than anything else. The final seconds of its last pre-recorded moments are a perfect example. If NBC’s Little Comedy That Can can hold onto that next year, it could really capture something special with its live third season. I, for one, can’t wait to see how this experiment turns out.