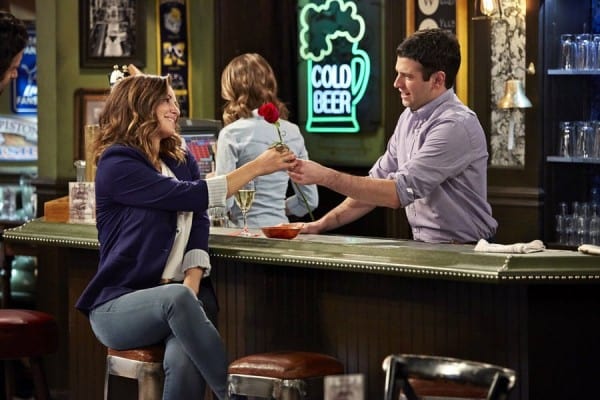 The Evolution of Danny Burton has been the overarching story of Undateable‘s second season, which puts the show in an interesting, and challenging position. While Danny’s maturity makes a great focal point for defining the character, the story – in theory – could become so centered around Danny (just how he’d like it, I imagine) that it could marginalize the other players of Undateable, reducing them to reactionary forces orbiting around the bright sun of Danny Burton’s perfect hair and inability to comprehend compliments from other human beings.

Yet Undateable has avoided this problem masterfully, and it’s done so by using Danny’s story to illuminate the lives of other characters. There are still times where it feels like the show’s a little too focused on The Burton, but “A Sibling Rivalry” shows how it can actually use an extreme focus on Danny as a gateway to stories about other characters. While “Sibling Rivalry” is very much about Danny showing his sister that he actually cares about her, the episode also takes on a number of other interesting ideas, chief among them Burski’s pursuit of Leslie, which has a noticeably different tone than their interactions did last season.

Burski’s perversions are still well-noted (in this episode alone, he admires a tailor for giving him extra room in the crotch of his pants), but “Sibling Rivalry” and previous episodes this season have added an endearing angle to this. It’s stronger than ever in this week’s half hour, which sees Burski scrambling to get a suit so he can surprise Leslie and be her date to an event she’s going to be recognized at (more on that in a second). For the first time, Undateable is exposing the hopeless romantic under Burski’s defensive surface, a facade made of raunchy jokes and creepy fetishes that still make their way to the surface in “Rivalry,” but act as footnotes to a more complex human being, rather than the defining actions of a weirdo nobody should want to hang out with.

Giving Burski an empathetic side pairs him well with Danny in this episode, even if their journeys are markedly different in construction, tone, and resolution. In the end, Leslie goes on a date with Danny’s sexpot fill-in, after Justin hurts his ankle on a tangerine peel (“I invented the friend zone,” he tells Danny earlier, arguably the most accurate thing Justin’s ever said about himself through two seasons). And all this character work doesn’t come at the cost of Leslie’s character, either: Undateable circles back to Season 1 and Leslie’s divorce, re-establishing her romantic insecurities and strengthening the relationship between brother and sister on the show, which was mostly shown in abstract last season – Danny and Leslie were definitely brother and sister, but their stories didn’t have the emotional weight that “Sibling Rivalry” has, elevating it above other episodes and scenes focused on similar material.

Now, the developments of “Sibling Rivalry” – and the second season as a whole – come at a bit of a cost to the other characters on the show. While Undateable has lacked developing characters like Brett this year, there’s been an interesting shift in building jokes out of characters’ professions in Season 2. We may not be adding a lot of depth to Undateable by making jokes about Danny’s job as a pizza delivery guy, or how Shelley negotiates at the retirement home he works at, but these touches quietly fill out the background of characters, setting the stage for future episodes to cash in on the quirks and histories the writers have designed for them. It doesn’t quite add new elements to their definition, but it fills out parts of their lives that we don’t normally see in a way that makes the characters more fully-rounded, even if the show’s not exactly painting them with the usual complexities of three-dimensional characters.

What’s important is that it works. Undateable‘s been able to shift its style and approach to storytelling a bit this year, without losing the core tenets of a light, hang-out stage comedy, which made it such a fun little watch during its abbreviated first season. Season 2 of the show has done a lot of the same, only better, and thanks to the undercurrent of maturity we’re seeing with Danny (and by proxy, other characters like Burski and Justin), it’s made for an infinitely more rewarding watch than most “light” comedies of its type.