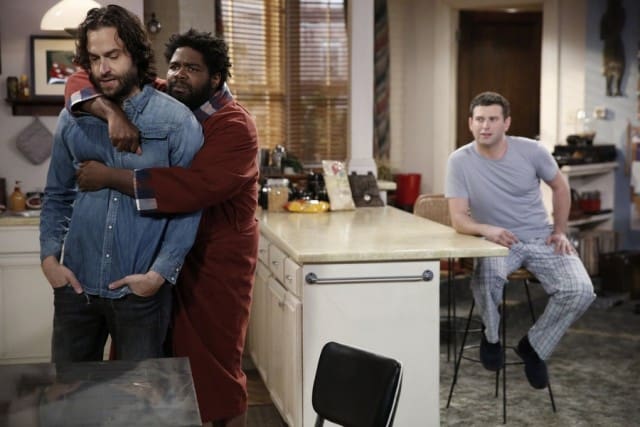 The fact that Undateable is still taking the time to carve out small character arcs during its energy-filled, spectacle-driven live episodes is impressive. While the show’s form has changed, its consistent sense of evolution has not. “A Truth Hug Walks Into a Bar,” even more surprisingly, maintains that feeling during a Shelley story – normally Undateable‘s most lighthearted diversions – an episode of callback jokes and touching moments, without any of the big name cameos or audience participation elements they’ve employed in the first two episodes this season.

In that sense, this is the first ‘regular’ episode of Undateable since the end of Season 2. “Truth Hug” is more about relationship dynamics than either the plot (as the end of Season 2 was) or the live elements the show’s enjoyed flaunting the last few weeks. And it makes for the most satisfying episode of Undateable in awhile, not because it’s funnier or more poignant than previous episodes, but because it feels like a true halfway point between the show’s old form and the new, giving a sense the Undateable writers have really found the series’ rhythm again.

And really, the stories themselves aren’t the most exciting. Shelley is letting his mom live in his place while she’s out of work, so Justin pushes Danny and the rest of the crew to help him move in to the spare room on the bar’s (never seen) second floor. This isn’t even really a Shelley story; it’s a simple reminder of how Justin’s turned the group into a bunch of singing softies, prone to group hugs and debates over what the phrase “monkey wrench” actually means. these are people who care about each other, and “Truth Hug” finds a very simple narrative to bring that out of every character, even Danny, the man whose impenetrable emotional wall has been fully conquered by Justin at this point.

At times, it does feel like the script of “Truth Hug” is avoiding some of the deeper issues it presents here, like how fast Justin and Candace’s relationship has moved (he’s calling her “honey” already?), or how Danny’s sudden ability to care about things has leaked into other parts of his life. It also comes without us spending any time in the lives of Brett (who get’s this week’s meta moment when he calls out how pointless his character can be), Candace, or Leslie, three characters who’ve gotten the short end of the stick so far this season (as for Adam… well, his only story has been his pursuit of Leslie, which is back in full effect).

However, it’s clear Unateable is getting comfortable in its new skin. from how little “Truth Hug” relies on jokes playing to its live gimmick – Brett’s fourth-wall breaking moment is all this show needs on a weekly basis – to how well it maintains pace with previous seasons in the Evolution of Danny Burton, this week’s episode of Undateable feels like a show getting back to its roots, creating quite an entertaining hybrid of comedy genres in the process.