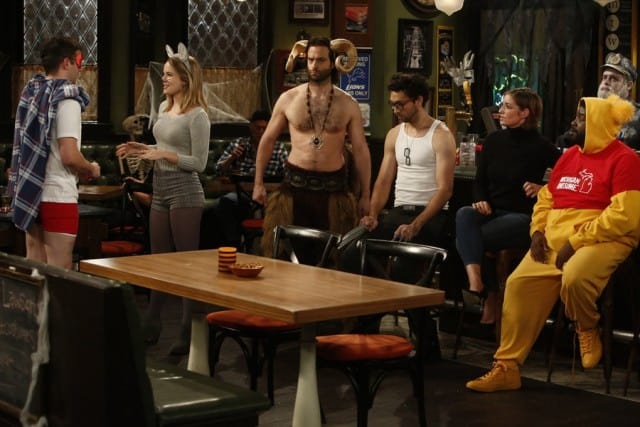 The balance Undateable has been able to strike has always impressed me. It’s a total “hang out” show, one that specializes in broad characters and jokes expressly written for the 18-39 crowd, but it’s a hang out show with an actual heart, one interested in the development of its characters and their adult lives in a way that’s rarely seen on a sitcom – and even less on a show acting as a live television event on a weekly basis. “Halloween Walks Into a Bar” could’ve been as weightless as a television episode possibly could be, and with nearly minute-long shots of Danny fighting legions of sperm in a centaur costume, there are certainly moments where it feels “Halloween” is working with very limited ambitions.

And yet, “Halloween Walks Into a Bar” might be the most important episode of Undateable yet this season, being the half hour when the show officially throws its hat into the Candace/Justin ring, and has them profess their love for each other. This is arguably the biggest relationship moment for any character on the show, and Undateable, surprisingly, doesn’t take that lightly. As we’ve seen before, Justin’s romantic smothering makes an appearance, which forces Candace into her first moment of emotional honesty in their relationship.

That’s an important moment in any relationship, and tying it to the first time Justin and Candace say “I love you” is the kind of “two birds, one stone” approach I can really appreciate. It helps develop their relationship on two levels: it allows them both to stop fantasizing each other’s “perfections” by introducing their first conflict, and it pushes their relationship to the next, natural emotional level with their mutual professions of love. As lightly as all these moments are played, they reveal a fundamental tool in maintaining Undateable‘s quality in its new, live setting: no matter how outlandish the jokes, pranks, and fourth-wall breaking material gets, Undateable still retains focus on its characters’ emotions, which makes it so much more than just a live comedy where friends hang out in a bar.

Sure, this courtesy doesn’t exactly extend to the entire cast on a regular basis, especially in the early-going this season, but using Candace and Justin’s budding relationship as a focal point to organically grow into its new format has allowed Undateable to maintain its essential emotional components and build on them. There are moments in “Halloween” where I wish Leslie or Brett’s tribulations with love would receive more attention (Leslie has a boyfriend, remember?!), but it’s almost been necessary: episodes focused on their characters have always brought a slight change in the show’s tambor, forcing them into different locations and circumstances unique to the other main characters of the show. Avoiding that early on, while it does make Undateable feel a little more superficial, has helped give it room to tinker with the changing priorities of moving from filmed to live.

“Halloween Walks Into a Bar” is another fantastic example of how Undateable‘s finding balance through this wild live experiment. Tt finds that balance between being a live holiday episode with a big guest (Meaghan Trainor, who has a great come-on scene with Ron) and an important foundation-building moment for the show’s central romantic relationship. As we’ve watched throughout television all week, that balance is hard enough to find on a traditional sitcom. How Undateable‘s able to do it in a live format is even more impressive.