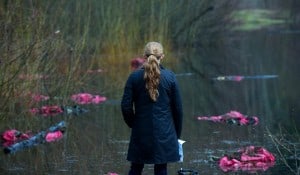 When The Killing returned last Sunday for its third season, I wasn’t sure what to expect. I had enjoyed the show’s first two seasons much more than most critics and viewers, but as the series kept approaching the inevitable reveal of Rosie Larsen’s killer, even I found my patience and attention tested. Thankfully, last week’s season three premiere (mostly) renewed my faith in The Killing and this week’s episode, “Seventeen,” continued to impress me.

The biggest complaint most fans had about The Killing in its first two seasons (aside from the main one of not having Rosie’s murderer revealed in the first season finale) was that we didn’t really know Rosie or care about her life before she died. She was simply a face and a name that the entire narrative was built upon, without much importance given to the actual character herself. However, this season The Killing is attempting to give us a wide variety of characters; some who may become victims, and others who will be forced to stand by and mourn the dead. Despite the fate of these new characters though, the most important thing is that we actually are learning about their lives and engaging with them. Whether it’s the brutal rape of Bullet or the dissatisfied relationship Lyric has with her boyfriend, Twitch, or the miserable home life of the missing Kallie, The Killing is putting in a lot of effort to get us to connect with these kids, trying to create the emotional bond that was simply missing with Rosie Larsen.

Another course correction being made by The Killing writers is providing connections and similarities between individual plots, so that they do not feel like standalone stories from separate shows. For example, last year’s mayor election felt very disjointed from the casework of Linden and Holder and the grieving of Rosie’s family. This year, however, we are treated to a fantastic performance by Peter Sarsgaard as prison inmate, Tom Seward, who was put in jail by Linden and her old partner for viciously murdering his own wife. The connections between this previous case and Holder’s new case of the murdered prostitutes give each scene with Sarsgaard an added significance; despite his attempted suicide in tonight’s episode, he will definitely be back, and most likely, play a pivotal role in discovering who is responsible for the deaths of those 17 working girls who were found dead in the lake.

All of these modifications aside, the main draw to The Killing for me (and the reason that I enjoyed the first two seasons as much as I did) has always been the bond between Linden and Holder and the performances of Mireille Enos and, especially, Joel Kinnaman. I could watch these two performers act in pretty much anything as long as they continued to bring their A-game, like they do for each episode of The Killing. Even though both Holder and Linden are working with other partners right now, the final scene of this episode, where they discover that one of the murdered girls was also featured in one of Goldie’s (the disgusting pimp who raped Bullet in last week’s premiere) videos, shows that these two detectives work best when they’re paired together. Let’s hope there’s a lot more teamwork from Linden and Holder as we go further into this season. 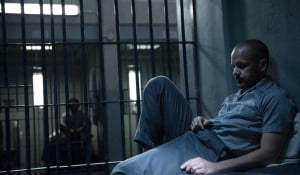 – Another thing I love about The Killing: its cinematography. Two shots specifically in this episode were fantastic: one near the beginning, showing Linden’s reflection in the water as we pan up to see her standing there, staring at the bodies, and another one a little bit later, when we first see Bullet’s beat-up reflection on the spinning lid of the trash can before we get a closer look at her bruises and scars in the bathroom mirror.

– I’m very interested to see where this whole thing with Seward’s son, Adrian, goes. He drew the picture of the crime scene and now says he wants to see his father. Color me curious.

– Even though it was hinted at last week with his wife’s words to Linden, this week it’s pretty much confirmed that Skinner and she had an affair. I’m sure those feelings will come back into play at some point this season.

What does everyone think about the new season of The Killing?