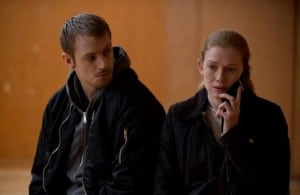 Wow.  I didn’t think The Killing would do it. I thought there was no chance that it would. But it did. It did it. The Killing killed off Bullet, and just like Holder, I’m devastated. However, I’m also impressed, because even though I declared last week’s The Killing the best episode of the season, tonight’s episode, “Reckoning,” may very well beat it for that slot.

By the end of tonight’s The Killing, our three main characters, Linden, Seward, and Holder, are all lost for different reasons, broken by the events that they have endured and looking for some form of solace that they cannot find. Earlier in the hour, after her meeting with Adrian, Linden had believed that she had found the real killer of Seward’s wife in Joe Mills (who turns out to be responsible for the murders of all the young teenage girls this season), but when Linden discovers that Mills was in Alaska during the time of the murder, she loses hope that she will ever be able to find the true culprit. Interestingly, however, during the episode’s final montage, it looks like Linden may have some possible new leads on the Seward case, and The Killing absolutely has to address who the actual killer is in its final two episodes this season.

Looking at Ray Seward, he is lost for reasons similar to Linden’s. He has now come to grips that he will not be saved and will have to face execution, and all the peace and comfort that he found in the words of his fellow inmate turn out to be only a trick, a manipulation from a criminal who loves to play mind games. Even though Seward’s character on The Killing has become more loud and animated these past couple weeks, and especially in tonight’s episode, that hasn’t stopped Saragaard’s performance from remaining powerful and nuanced; he has been nothing but masterful this season.

Lastly, Holder has become so unraveled by Bullet’s death that he isolates himself from everyone he cares about. He cruelly yells at his girlfriend, Caroline, attempts to kiss Linden as she comforts him, and lastly beats the crap out of his partner, Reddick, in front of his family, after he discovers that Bullet called twice on the night of her death and Reddick failed to notify him. 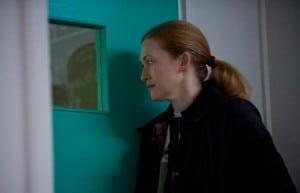 Throughout tonight’s entire episode of The Killing, Joel Kinnaman was sensational, as he portrayed Holder’s grief, despair, and desperation perfectly. There wasn’t a single moment during “Reckoning” where I did not feel for Holder, and Kinnaman’s performance, along with the strong writing that the relationship between Holder and Bullet received this season, was the reason for that. I really hope more people give this season of The Killing a shot, because Kinnaman, who will still most likely go unnoticed during next year’s awards season, was truly Emmy worthy tonight and has been all season.

With only two episodes left this season, I believe that I can officially say now that The Killing truly deserves some of the praise that its fellow AMC shows receive. Would I go as far as to say that it’s as good as Mad Men and Breaking Bad? Probably not, but I would definitely say that season three of The Killing has been worth every moment I’ve spent watching it and that I cannot wait to see how it all comes together over the next two weeks.

What did everyone else think of tonight’s episode of The Killing? Were you as amazed by Joel Kinnaman’s performance as I was?