Home
Television
The Killing
The Killing Season Three Finale Review: The Killer Within 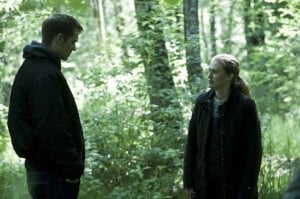 There was a lot to love about The Killing‘s two hour season finale tonight, especially about the episode’s first hour. “From Up Here” allowed every central character of this season to have their moment: Twitch decides to stay clean, Lyric falls back into the “working girl” game, Danette finds some solace in her conversation with Lyric, and Holder and Linden are actually smiling and laughing for a little while, as they go back and forth, joking around in the car. To me, this episode, with its somber, melancholy tone and slow pace, which were only broken up by the few moments of humor provided by Holder, is what The Killing has done best this season. It provides us with solid characters and a rich atmosphere and just lets events play out in a realistic but entertaining manner.

Nothing about the first hour of The Killing‘s finale felt contrived or forced, and to be honest, part of me wishes that The Killing had ended its season right here. However, we still needed one last twist and one final revelation about who the true killer of this season has been, and the somewhat obvious reveal that it was Linden’s ex-partner (and current lover) James Skinner didn’t really do much for me. It’s not like the second hour of tonight’s The Killing, entitled “The Road to Hamelin,” was bad; it just wasn’t up to par with what the show has been doing these past few weeks.

When examining it, the main problem with the finale’s second hour is how plot-driven versus character driven the episode was. Because hell hath no fury like The Killing fans scorn, the show’s writers, along with AMC, needed to promise that this season’s killer would be identified by the last episode; unfortunately, this forced The Killing to make the second part of its finale all about who the killer was rather than how the killer’s actions affected our main characters, which is what the first (and better) episode of the night explored and did a fantastic job of illustrating. While it might seem like a cool twist that Skinner ended up being the killer and that Adrian saw him from his tree house by the lake, I’m much more interested in how Lyric and Twitch are making out with their new apartment or how Holder has been able to at least somewhat make peace with his guilt about Bullet’s death. What made season three of The Killing so superior to the show’s first two seasons (which I still enjoyed but do not nearly respect as much as I do this most recent season) was that the series was no longer about the victim or the killer; instead, it was about the tragedy caused by these random acts of violence and how we, as people, pick up the pieces afterwards and keep moving forward

The Killing this season was filled with themes of guilt, identity, and faith and it examined these issues through plenty of vivid, relatable characters. While Linden executing Skinner was a chilling and intriguing note to leave us on, it in no way comes close to matching the haunting power of last week’s final moments, and that was all thanks to the character of Ray Seward and the performance of Peter Sarsgaard. We cared about Ray, even if we didn’t like him, and his death wasn’t thrilling television because of its shock value; it was compelling to watch because of how much thought and development had gone into crafting his character. For me, the third season of The Killing was much more about tone and character rather than shocking turns and plot twists, and in the end, I just wish the show had been able to find a better balance pf that tonight in its season finale. 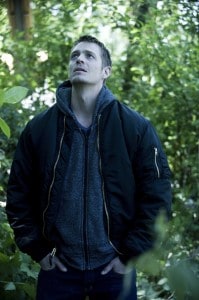 – Really enjoyed Holder and Caroline’s final scene tonight. Even though Holder’s relationship hasn’t gotten much screen time, I still feel that, even if it’s mostly in the background, it adds just another layer to this already fascinating character. Plus, Joel Kinnaman is just so freaking charming.

– All the actors have been killing it (pun intended) on this season of The Killing. Bravo to all the performers tonight. I never questioned anyone’s authenticity, and the emotion brought out by all the actors, especially in tonight’s finale, was terrific to watch.

– Overall, despite my slight disappointment about tonight’s second episode, I still think that this season of The Killing was some of the best TV I’ve seen so far this year. I’d probably give the entire season an A- grade. I’ve really enjoyed reviewing it this summer, and hope that you guys have enjoyed reading and responding to my thoughts. Thanks for reading, thanks for commenting, and, hopefully, there will be another season of The Killing for us all to watch and discuss.