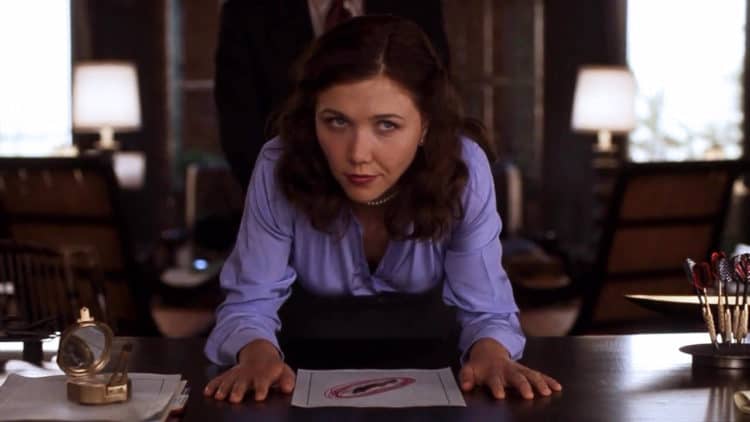 Maggie Gyllenhaal is definitely a different type of actress and yet in the same breath she’s the type that can do anything and be anything you happen to need her to be. That could include everything from an individual that’s willing to give up a great deal of personal freedom and dignity to a woman that won’t back down from anything since she’s just that emotionally and mentally tough. She definitely exudes the feminine side of her person but from an intellectual and emotional standpoint she’s one of the more forthright individuals in show business and projects an aura of ‘not to be messed with’, meaning that she’s confident, sure of herself, and ready to do what it takes to make people realize that she is in fact a rather talented and very skilled actress. Some of her roles have been true head-scratching moments, but they’ve still been enough to indicate that she’s in complete control of her career.

Upon looking at this movie you might think that this would be a huge step backward for women until you realize the idea that Lee is in fact stronger than she lets on, but she’s ultimately happy to do what Grey is asking since it pleases her. BDSM is definitely not for everyone but it seems to work for some folks as it speaks of sexual liberation, which is kind of odd considering the whole idea of it. But hey, once again it’s a thing best left between those that practice it since Lee and Grey seem to make it work by the end and Lee most of all is able to feel like herself when she’s being commanded by her boss, who eventually becomes her husband.

One thing about Maggie you can say with the utmost assurance is that she does play strong female characters since Rachel might not be physically imposing or even that powerful but her attitude and her wit are more than enough to help her keep up with everyone else. Even when the Joker has her face to face with knife in hand she’s not the type to quiver or break down in fear as she actually strikes him before Batman shows up. As one of the few individuals who knows that Bruce Wayne is Batman however she’s also one of those that, in the story, is a slightly more tragic figure than others since anyone that shares this secret comes to realize they care deeply about Bruce but can’t ever get too close to him.

She doesn’t have the biggest part in this movie but instead serves as another supporting actor for her brother Jake, who dominates the screen as his continual breakdown is allowed to run throughout the entire movie. This is one of those films in which paying attention is vital since if you don’t then it’s highly likely that you’ll have to go back to previous scenes just to figure what’s going on and how certain things happened. As a cult classic Donnie Darko is among the many movies that a lot of people tend to find amazing and in many ways highly provocative, and there are plenty of reasons why.

Some hearts aren’t meant to be tamed until they feel the need, and Blake’s is one of those without any doubt. That kind of change however was brought on by someone, meaning Jean and her son. Despite the hard style of living that Blake is known for in the movie and the way that he seems to just coast by and get along, Jean and her boy touch him in a way that’s hard not to notice since it seems to wake something up in him that rekindles that creative spark that is necessary for so many performers. As a means of reviving his career Jean and her boy are a great inspiration to Blake, who eventually ends up better than he started.

There was a time when marriage was, to a woman, the height of what they could aspire to in many parts of society. But it took a monumental shift and a very open challenge for women to see what their worth was outside of the house before it could become a reality. Going to school was meant to be followed by a marriage to a good man that could provide for and support his family while the wife stayed at home and raised children. But in a world that needs women as much as it needs men and vice versa it’s important to let everyone know, women especially in this movie, that their value is bound up in more than just the home.

She’s one of the stronger personalities in show business if you couldn’t tell by now.