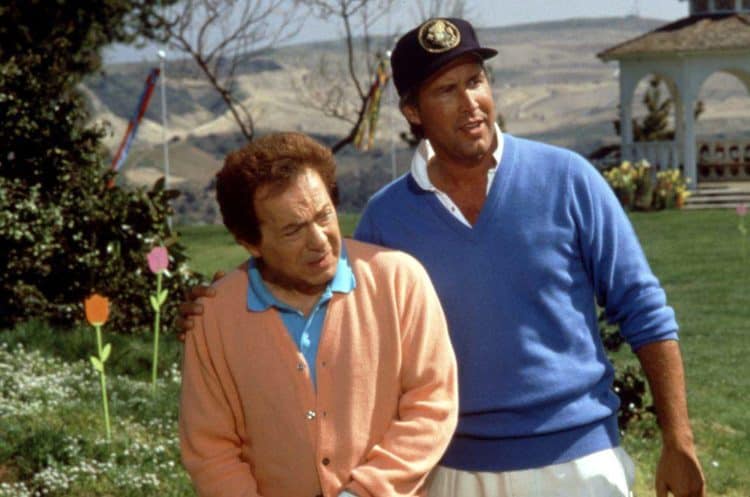 Some sequels shouldn’t be made in the opinion of some folks, but then again, some sequels don’t seem to have a lot in common with the original movies and thus kind of stand on their own. That seems to be where a lot of folks get tripped up when they look at Caddyshack and Caddyshack II. Mike Mcgranaghan wrote that it’s not entirely possible to defend Caddyshack II because even the cast said that it was a horrible movie, but let’s play devil’s advocate here and take the time to really see how and why the movie isn’t as terrible as many made it out to be.

If you compare this movie to the original then yes, yes it is horrible since as a follow-up it seems to trip and fall on its face over and over again. There was no comparing to the first one since the back and forth between Bill Murray and Chevy Chase and the whole idea of this being bound up in a different culture and a different time period was hard to avoid. The original Caddyshack was still rooted firmly in a time when young people were considered to be rascals, anyone that wasn’t old money was considered to be a slob, and the snobs were the ones with all the power. Even Ty Webb back in those days was kind of a jerk and people still loved it.

But now let’s fast-forward to the era in which Caddyshack II was made. It was later in the 80s, things were a lot different, and the general feel of the movie was a lot different. Jackie Mason wasn’t Rodney Dangerfield and Chevy Chase was definitely changed since he’d stopped being the jerk and was the reclusive millionaire that didn’t golf on the course any longer. Chandler Young was a new and somehow even snottier version of Judge Smails and his wife was definitely a snootier version of Mrs. Smails. The characters weren’t that bad if you took them this movie as its own film and not an extension of the original. Unfortunately the only good you might hear about it would be on social media and from message boards on sites like IGN Entertainment where people aren’t afraid of being ostracized for their opinions. True, many people will still claim that it’s not a bad movie to watch if you’re bored and need something amusing, but that’s better than lambasting the movie for no good reason.

If there’s any real gripe about Caddyshack II it has more to do with Dan Akroyd’s character than anything. If you remember from the first movie, Carl, played by Bill Murray, was comedy gold. The guy could pull a funny face and he’d have people in stitches since he knows his stuff and is able to make people laugh in a very effective way. Dan Aykroyd is also a legendary comedian, though in this movie he’s been accused by several, including Ary Rosenbaum of That401KSite, of simply cashing in and taking on a role that was a poor imitation of Murray’s. That’s hard to argue against since Capt. Tom Everett was a squeaky-voiced nutjob that didn’t really fit the same bill that Carl took the to bank over and over. Plus, the whole interaction between Murray and Chase is legendary even if they were trying to upstage one another continuously, while Aykroyd’s interaction with Chase came near the end of the movie and was only memorable for the fact that it was so over the top as to be laughable.

It’s hard to mount a very passionate and in-depth argument about this movie but it’s still equally hard to really vilify it as one of the worst sequels ever since before and after its time there have been some sequels that made you look to the sky and wonder ‘why?’. If you take this movie at face value and on its own, without connecting it to the movie before, then you might have a good time and enjoy it since Jackie Mason is pretty funny in his halting and somewhat herky-jerky way, and you don’t need to worry so much about Chevy Chase being the big star since he’s kind of tucked away where he’s not going to be seen as much. If anything it’s harder to watch since there’s no Bill Murray and Dan Aykroyd, good as he is when it comes to comedy, just kind of phoned this one in. When all that’s been said though watching this movie is something that might be fun if you have nothing else to do and just need a good laugh since there are moments of the movie that are pretty hilarious and don’t disappoint as much as people like to think. Take this scene with Randy Quaid for instance, it’s just classic.