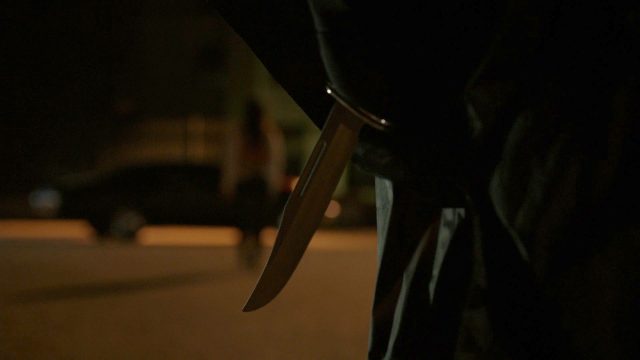 Scream: The TV Series has been having a great season with its sophomore run, and a move to a new night doesn’t seem to be slowing it down at all. Let’s take a look at what happened in this week’s new episode, “Jeepers Creepers.”

The episode opens with the Lakewood Five all dealing with the discovery of Jake’s body in their own way. In particular, Noah is reeling from the revelation that Audrey is somehow involved in the murder, but he doesn’t quite understand how yet. Emma, too, is in a weird place as she’s now in contact with the killer after encountering “him” (I use that pronoun loosely since we have absolutely no idea what gender the killer is yet) for a second time during the lockdown. Emma tries to get Noah’s help in the matter, but she finds out that he believes Audrey is the prime suspect and freaks out at the very thought. Jake’s murder is beginning to pit all of the friends against each other in different ways, and it’s a great narrative device that is providing some needed drama to the story.

Noah’s investigation of Audrey is one of the more interesting things to come from this season so far. It’s surprisingly fun to see this new dynamic between the two friends after so much time being spent on building it up and showing the romantic tension between the two. I’ve said since the very beginning of the series that John Karna is the undervalued treasure of the cast of Scream, and his performance this season has only helped to establish that fact further. This episode is really a starring vehicle for Noah in a lot of ways, and it’s very much appreciated.

On the topic of the cast, I should also mention how great Santiago Segura is at playiung Stavo. One of the newer members of the cast for this season, “Jeepers Creepers” gave him some of the most character development he’s received so far. It was fun seeing him so mistrusted by the rest of the cast for half of the season, but it’s even more interesting to be able to see him interact with them on a more personal level now. His scene with Audrey in the coffee shop, for example, did more for his character than anything else so far this season.

Emma’s journey this season has been odd because she’s been sort of on the outskirts of the main plot even though so much of the story concerns her. Starting with “Jeepers Creepers,” though, that changes for the better as she fully jumps into investigating the new killer and finding out who he or she is. For the most part, it seems like everyone is finally on-board with solving the mystery, and that should be able to improve on the pacing problems that parts of the season has had up until now.

Finally, I want to mention how great the scene between Noah and Audrey toward the end of the episode is. Without giving too much away about the situation, they two have an extremely heartfelt conversation that should prove to be a defining moment in the relationship between the fan-favorite characters. The final act of the episode as a whole is very tense and well-written, and it definitely strengthens an already strong episode.

“Jeepers Creepers” is one of the best episodes of the season for Scream, and it does a lot to progress the story while delivering some extremely strong character moments. Its greatest accomplishment is tying Stavo more heavily into the story, but its biggest strength is definitely the performance it allowed John Karna to give as Noah.

What did you think about “Jeepers Creepers?” Let us know your thoughts in the comments down below!

“Jeepers Creepers” is one of the best episodes that the series has offered, moving the plot way forward while delivering strong character moments.