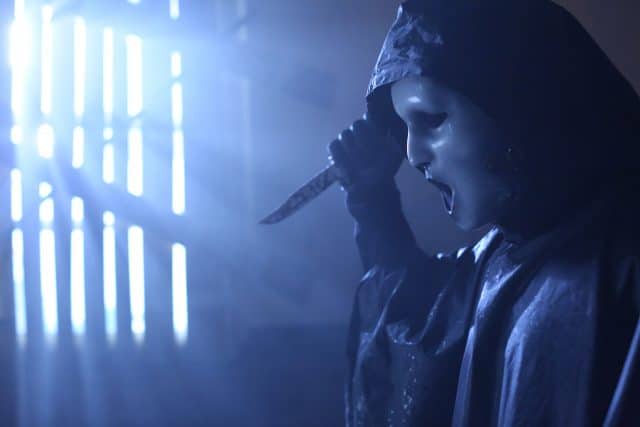 MTV’s Scream has had ups and downs all season, but, for the most part, there’s been a consistency in the show’s quality. We’re moving into the final act, though, so let’s see if that consistency holds up and take a look at this week’s new episode, “The Orphanage.”

The episode opens with Emma in what is clearly a bad spot as she has a dream about stabbing her friends after everything that happened at and after the carnival in last week’s episode. The early part of the season played up the dream-like aspect of the story, but that’s fallen away for the most part lately. Based on the opening of “The Orphanage,” though, it seems like that will be a focal point once again.

Aside from Emma, the rest of her friend group are also dealing with their own lives, reminding us that everyone on the show is being put in predicaments because of what happened last season and the murders that have been going on this year. It seems like every scene in the episode is full of major reveals, so it’s difficult to talk about the episode without simply spoiling what happens. Something that’s easy to talk about, though, is how great the show is handling its character moments and relationships. My favorite of these, surprisingly, are the ones dealing with Brooke. Brooke has been going through some major stuff this season, and her drunken tirade may be the lowest point she’s seen. What I like, though, is the fact that she still feels some allegiance to Jake and his death, keeping her from moving on completely with the very shady Stavo. I feel like most shows would just set her up for more pain, but Scream is having her actively seek out a way of dealing with everything on her own. It gives her a strength that I didn’t really expect.

Speaking of Stavo, he continues to be the most obvious suspect for the killings. As I mentioned in my review of last week’s episode, the fact that it so strongly leads to him makes me think the writers are setting us up for a twist, but the evidence against him just continues to pile up more and more.

Oh, and hey! Noah and Zoe had their big moment finally! I talk a lot about how Noah is easily my favorite character on the show, and I’m so happy that he’s getting the chance to see happiness himself. Again, though, this is quite obviously going to all come crashing down and bring him more pain than he’s ever seen before, but it’s sure fun seeing him have a temporary moment of peace.

“The Orphanage” also features the first death of a female character this season, and it’s a scene that reminds us just how gory the series can be. We also rediscover a lost body that we never expected to see again, and it reunites two characters in an unexpected way. Overall, “The Orphanage” felt like a bridge episode intending to set up the final episodes of the season, but it still brought plenty of development and shocks (particularly the final shot of the episode) that will last us until next week.

What did you think about this week’s new episode of Scream? Let us know your thoughts in the comments down below!

“The Orphanage” bridges the final two acts of the season in a strong way, setting us up for an explosive final three episodes.