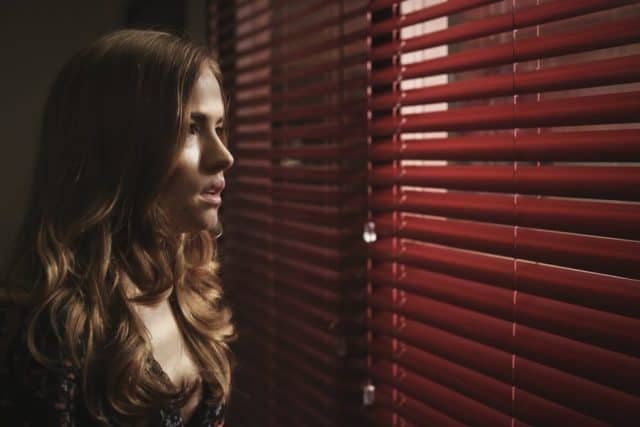 I missed a bit of Scream due to being on vacation, so I’m going to play catch-up this week by reviewing two of those missed episodes at once. Let’s take a look at what happened in both “Happy Birthday to Me” and “Dawn of the Dead.”

The first episode begins with Audrey burying the corkscrew that was used in a murder the week before, continuing to implicate her in everything that’s been going on. The past doesn’t stay buried, though, because the new killer digs it up and places it in her bed while she’s asleep. As she’s dealing with this terror, Emma is pushing through her own issues, trying to understand both her nightmares (using her dream journal) and the living nightmare surrounding her parents. The introduction of Emma’s father has given the series some new territory to explore, but it’s also allowed for the show to fall into stereotypical “soapy” clichÃ©s at times. It’s definitely nothing over-the-top (yet), but I do hope that the writers don’t fall into that trap that they seem to be setting for themselves.

Brooke’s story has been the most interesting of the characters this season, which is a nice distraction from how unlikable she often is. The writers have made her much more tolerable this year, but a lot of that could be because of the understanding on the part of the audience that anything she thinks she’s going through right now must certainly come crashing down once the revelation about Jake’s fate is discovered.

Another aspect of Scream that’s been playing an important role so far this season is the burgeoning relationship between Emma and Eli. Though still “with” Kieran, the romantic tension between Emma and Kieran’s cousin offers a fun way of using a new character in close proximity to the main cast that we’ve come to know so well. Equally, the potential between Noah and Zoe has been fun to explore, although its purpose seems to be more pushing Audrey and Noah together than trying to give Noah happiness elsewhere.

One of the cooler things about “Happy Birthday to Me” is the visual representation of the drug that the kids were dosed with in the tequila. I’ve always been a fan of the way that hallucinations and paranoia can be portrayed on television, and this episode does some pretty cool things to that effect. In particular, there are a couple of scenes that play with the episode’s aspect ratio in a pretty unique way, and I appreciate the effort that went into stylizing the experience.

Also, without spoiling it, the episode ends with a horror movie homage that works perfectly in the context of the series, and I hope there’s much more of this coming in the future.

“Dawn of the Dead” starts out with the aftermath of the aforementioned event, putting the school into a state of lockdown as the police try to figure out exactly what happened. A brunt of the episode shows the questioning of all of Jake’s friends over where he’s been since “disappearing,” and the trauma brought to those left behind is portrayed surprisingly well. This also helps to humanize some of the more outrageous characters on the show, making it much more easy to relate to what they’re all going through. It’s hard to talk about this episode without outright spoiling exactly what happened (something I don’t want to do until the next review), but the episode is largely a bottle-esque episode that focuses more on character moments and development than simply progressing the plot. The story still moves forward in a big way, of course, but it’s nice being able to get some more intimate time with everyone after all the buildup in the season’s first act.

“Happy Birthday to Me” and “Dawn of the Dead” were two very different episodes that focused on different aspects of the story structure of Scream, offering both plot progression and strong character beats in their own ways. It’s clear that this season of Scream is creatively unique in regard to the show’s first year, but the willingness to shake things up is working pretty well so far.

What did you think of episodes four and five of Scream? Let us know your thoughts in the comments down below!

Scream Review: "Happy Birthday to Me"/"Dawn of the Dead"

“Happy Birthday to Me” and “Dawn of the Dead” are two strong episodes that progress the plot through strong character moments.