Home
Television
Scream
Scream Recalls the Movies in the Season 2 Finale, “When a Stranger Calls” 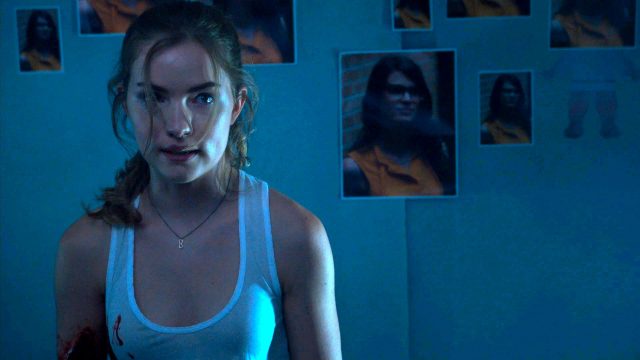 At long last, we’ve finally reached the end of the second (and maybe final??) season of Scream: The TV Series. The mystery surrounding the killer’s identity has been building and building all season long, and it’s time to settle the mystery once and for all. Let’s take a look at what happened in the season 2 finale, “When a Stranger Calls.”

The episode opens, picking up from the end of last week’s entry, with Emma and Audrey in the back of the police car after getting arrested. There’s an accident, however, as the killer strikes suddenly, but the girls are shocked as the killer gives them the handcuff keys. The girls run through the night, finally ending up at a convenience store  where the killer calls and forces them to continue playing his (or her) game. The underlying thought throughout this entire process is the idea that maybe Emma and Audrey are experiencing a shared psychosis because of what they’ve been through, and it seems that, perhaps, they’re the killers themselves. This is aided by the girls’ teacher, who finally tells the sheriff about this theory.

The girls manage to make it to Kieran’s house, and he agrees to help them right as Eli shows up. Emma hides as the two cousins have a confrontation about Eli’s seeming stalking of Emma, keeping the door open that Eli could potentially be the killer, too. Eli leaves, and the Lakewood Five (with Brooke and Noah joining the others) meet up at the theater. Emma lets the killer know exactly where they are, and the gang prepares for war. (As a side note, we get another wonderfully meta Noah moment that made me realize how much I’m going to miss this character if season 2 really is the end of the show.) Brooke is attacked by the killer, and Emma is forced to run when the police show up so that she doesn’t get caught (interestingly, Audrey has already left). The shared psychosis theory continues to seem likely until Emma receives a picture message with Audrey’s unconscious body. More or less, it’s at this point that we realize the killer is certainly someone else, narrowing our suspects down to almost the bare minimum,

Emma finds her friend, and Kieran and Eli show up on the scene. Eli has been stabbed, and he admits that Kieran was the one that stabbed him. An argument ensues, and Emma accidentally shoots Eli. As Audrey wakes up, Kieran has a slip of the tongue that finally reveals that he is the killer.

The remainder of the reveal scene explains exactly how everything happened and why, and it’s a great bit that puts a lot of context into the first two seasons of the show. The coolest aspect of this, though, is the way this reveal calls back to the film franchise that the series is based on. It also gives us the single best scene of acting that Amadeus Serafini (Kieran) has had in two seasons. The reveal managed to be surprising as well as realistic, and the final act of the episode is among the best ten minutes that this series has ever had.

The very final moment of the episode gives us a brief hint that things aren’t quite as over as they seem, and we’ll have to wait until October for a very special Halloween edition of Scream to find out what will happen. Will that be the finale of the series? Will there be a third season? Right now, we have no idea, but “When a Stranger Calls” was, hands-down, one of the best episodes that Scream has produced in two years, and if this really is the end, what a spectacular way to go out.

Scream returns for a Halloween special in October. What did you think of the season finale of Scream? Do you hope there’s a third season to come? Let us know your thoughts in the comments down below!

Note: I apologize for being a few days late on this one. Life got in the way, so I went a little more spoilery in this review than I normally do with season finales.

“When a Stranger Calls” closes out Scream’s second season in a surprising and spectacular way.