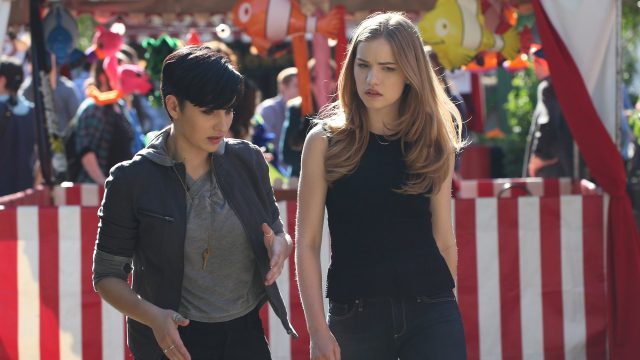 At this point in the season, we’re probably beginning to get some real clues concerning the identity of the killer on Scream. Does that mean we’ll soon know for sure? Let’s see by taking a look at this week’s new episode, “Village of the Damned.”

The episode opens on the one hundred year anniversary of Lakewood’s founding, marked by the annual carnival. As the celebration approaches, Audrey is still being tormented by the killer, and Noah’s biggest advice is for her to finally tell Emma everything. She still isn’t particularly willing, though, and moves on just as Emma continues to grow closer to Eli in light of recent events. This closeness, however, leads her to tell the police about the fire, determined to not keep secrets any longer. Knowing Eli’s track record, the new sheriff advises Emma to stop hanging out with Eli, but she considers that exact course of action of her own volition. She also attempts to make things right between her and Kieran, but Eli’s shadow continues looming over their relationship. I’ve talked about it before, but I’ve (surprisingly) really enjoyed the relationship drama that’s been introduced this season. It goes against everything that I am, but I feel the familial connection between Kieran and Eli has elevated it to a level that wouldn’t be possible with this show otherwise.

The second half of the episode is all about the carnival in town. All of our main players are present for the event, and some are paired up in more unexpected ways than usual. We get our relationship pairings (Noah and Zoe, Stavo and Brooke), but we also get, finally, Emma and Audrey back together (I really appreciated the line about their temporary breakup being included). In a fun scene, we also get a brief fight between Eli and Kieran over Kieran’s past, and it seems like the show is trying to make us believe that Eli is involved in the killings. The fact that it’s pressed so hard makes me think that it’ll end up being the complete opposite, but the possibility has to remain. The carnival also features a great moment with a drunk Brooke delivering a speech before all of the attendees, and it’s great because it allows us to take such a deep and personal look at who this character really is and what she thinks. Free of her inhibitions, Brooke’s form of PTSD is allowed ot come out in a huge way, and it’s a very appreciated character moment.

I just want to briefly mention it, but I still absolutely love the relationship between Noah and Zoe. It’s so great to see a fan-favorite character experience real happiness, and it’s going to be equally as great to watch it, inevitably, all come crashing down before the end of the season (sorry, Noah).

The highlight of the episode is an extended sequence in the carnival’s fun house near the end of the episode, reminding us that, even with all of the relationship drama, Scream is a horror series. In particular, there’s a wonderful shot of the killer’s face in a shattered mirror that works so perfectly in the context of the scene.

“Village of the Damned” was a very fun episode of Scream that featured plenty of great horror moments while still progressing the plot. In particular, I loved what it did to the relationships and am grateful for the moment we got with drunk Brooke.

What did you think of the newest episode of Scream? Let us know your thoughts in the comments down below!

“Village of the Damned” was a very fun episode that offered more horror than usual while still delivering great plot and character moments.