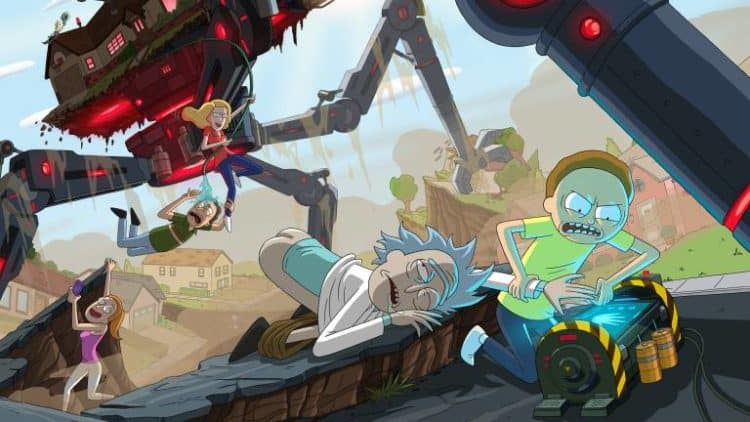 It’s safe to say that Season 4 of Rick and Morty started off with a bang. Like many season premieres from the sci-fi comedy, ‘Edge of Tomorty: Rick Die Rickpeat’ feels like a classic Rick and Morty adventure. It follows the same pacing and meta-humor that we’ve grown accustomed to seeing. It is the perfect kick-off to an utterly fantastic season (maybe the best one yet). So, let’s break down this episode! *Obviously there’s spoilers, duh.*

In the wake of Season 3’s finale ‘The Rickchurian Mortydate’, Rick is no longer the head of the household. Jerry and Beth have gotten back together, and the five of them are living as a seemingly normal family. Rick begins the episode by begrudgingly asking Morty’s permission to accompany him to Forbodulon Prime for Death Crystals. When the Death Crystals are in your hand, you can see how you die; Morty picks one up and begins seeing 100’s of possible deaths he could live through. Rick explains that if you are living right, the visions from the crystal will always change, as your fate changes from one decision to the next. Morty sees a future in which he dies as an elderly man with Jessica by his side, and begins to follow as the crystal guides him to his preferable death. After an argument over the crystal, Morty accidentally crashes the flying car and throws Rick through the windshield, killing him. A hologram Rick pops out of the trunk, and reveals that he’s a back-up protocol to clone Rick. Morty begins to clone Rick, but the crystal shows that he will not die with Jessica anymore. He decides to ditch the plan, and drive off back home with Rick’s hologram.

Meanwhile, Rick’s DNA is re-routed to a clone vat in an alternate reality (because his clone vat, otherwise known as ‘Operation Phoenix’, was taken offline after Season 2 Ep. 7 ‘Big Trouble In Little Sanchez’). After multiple re-incarnations that all end with Rick’s death and yet another re-route, he lands in a reality where instead of people, everyone is wasps. Rick C-137 has dinner with the Wasp Smith Family, and Wasp Rick agrees to help Rick C-137 get back to his own reality. Upon them returning to C-137, they meet up with Rick’s hologram, who explains that Morty is on a warpath to die with Jessica (as guided by the Death Crystal). The three Rick’s catch Morty (who is now an Akira-style crystal monster on a murderous rampage), and remove the crystal from him. After getting rid of hologram Rick, Wasp Rick takes Rick C-137 and Morty back to their home, before returning to his own reality.

Season 3’s finale was a pretty tough episode to top, but Season 4’s premiere delivers with ease. It’s a classic, reality-hopping, dying and resurrecting, over-the-top, whirlwind of sci-fi joy. It is the perfect way to start off Rick and Morty’s best season yet, and introduces the more human and flawed elements of Rick and Morty’s personalities. This episode opens up tons of narrative possibility for exploration of Rick and Morty’s emotions and sensitivities. Ultimately, we’re getting to see a more nuanced and developed version of Rick and Morty, who consistently show vulnerability to each other. Season 4 starts off as a new venture, going into uncharted emotional depths and relationship dynamics. We are also getting the new dynamic of Rick being at the bottom of the Smith family totem pole. It is a completely new element to the series, as Rick is typically in charge of every situation (and is 12 steps ahead of the game all the time). It opens up a lot of opportunity to explore new family dynamics; possibly even getting Beth, Jerry, or Summer to take the lead in future episodes and adventures.

This was a really solid premiere, with so many great moments. Like I mentioned, the series takes a big turn here, with the last few moments of the episode focusing on Morty standing up for Rick, and Rick admitting he was wrong. This is a first for both characters. As we remember in Season 2 Ep. 5 (‘Get Schwifty’), Morty was ready to leave Rick behind forever. This episode is a great benchmark for the development of our characters, and shows just how far they have come emotionally (as well as the heartfelt ties that bind them). Rick and Morty remind us that with a little bit of understanding, there’s no bridge that can’t be rebuilt, and no relationship unsalvageable. As Rick finds his way around this new family dynamic, we see him insecure and unsure of himself. It’s a beautiful reminder that even the most intelligent and fantastic of us have to battle their own mind.