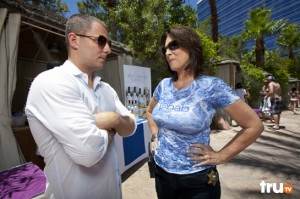 On this episode of Rehab: Party at the Hard Rock Hotel, Matt still hates Sharon, the feeling is still mutual, and everyone else is still caught in the middle. Actually, I’m pretty sure that describes all of this season and most of last.

It’s nine in the morning and there’s a really big snake poolside that apparently only one guy can see and no one else can find. This is not Mutual of Omaha’s Wild Kingdom, but Sharon and her security team are dispatched on a snake search anyway. Meanwhile, Matt goes to his pre-shift meeting, where he warns everyone that it’s going to be really, really hot. Wow, he’s actually concerned about someone’s well-being. I am stunned.

Sharon tells her security officers about the fiasco with the door host from last week, and warns them again about the phantom snake. “Do we have a radio code for snakes?” someone quips. Jake is determined to find the snake and put an end to all this, because he’s awesome like that. He later finds out there really is a snake, which belongs to a belly dancer. Eventually, he and Sharon locate the massive python outside one of the cabanas, and argue over which of them have to touch it. They settle for getting the belly dancer and letting her deal with it.

Matt has his first issue of the morning when his assistant spots one of the cabana attendants hanging out inside Vanity. It’s six minutes into the episode. Unsurprisingly, he vows both violence and firing. I sort of want to start a drinking game for all the times Matt threatens one or both of those things. The idiot deserves to get fired, though, since he’s stupid enough to come back and gets snitched on by Matt’s assistant. Cue Matt’s ominous music theme as he now knows who the guy is and sets out to knock him off. There’s a profanity-involved, one-sided conversation before the guy gets tossed out, yet another casualty of Matt’s reign at Rehab. Not that most of those people didn’t deserve it, but I can’t think of a single person Justin fired when he was GM.

Someone drops from the heat already, and is taken in to be examined. Even in the DJ Bar, Jessica and Chantel are feeling the burn. Jessica pleads with Chantel to go get checked out, and surprisingly Matt also urges her to do the same. This may be the most compassionate I’ve ever seen him. “The health of my employees, that comes first, above and beyond,” he says, and for once I want to hug him. Chantel, however, is stubborn and doesn’t want to go home when she has a job to do, so back she heads to the DJ Bar. She’s not the only one to end up in trouble, though, as Amanda starts to fade and then passes out while talking to Sharon. An ambulance is called, and she’s taken to the hospital.

Since he’s done with the snake, Jake is available to deal with a drunk guy who’s been involved in a fight and doesn’t want to leave as he’s been told. As if that’s not bad enough, some other guy is being kicked out at the same time by another security team, so it’s double trouble for Jake. Once that’s dealt with, there’s a fight at one of the cabanas that involves a door host accidentally clocking a security officer in the process of breaking it up. This is an accident with good intentions, but Sharon is ticked off anyway. Needless to say, this provokes yet another confrontation between Sharon and Matt. For once, I kind of agree with Matt in that everyone was just trying to help what was an ugly situation. However, because this is Matt and Sharon, everything gets blown way out of proportion with expletives and personal insults, and ends with Sharon’s apparent resignation.

Do you think Sharon is really done at the Hard Rock? Is she really going to walk away from a decade-long career? Or is it going to be more of the same next week? Let me hear from you below.