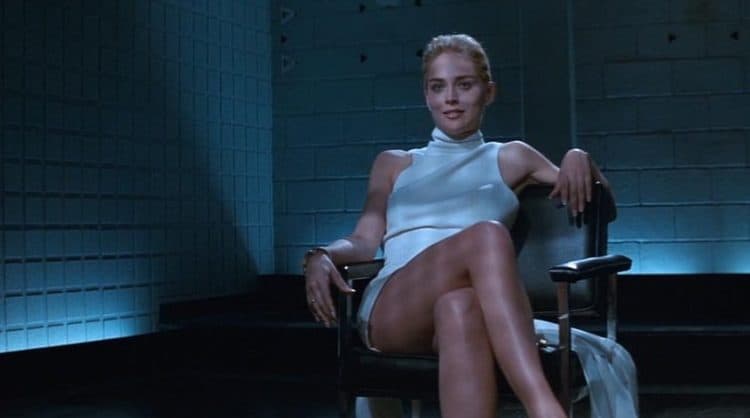 If you know anything about Basic Instinct then you’ll know that there was an actual story there beneath the sex and that the infamous leg-crossing scene was…wait for it…not planned. That’s right, this one scene that has been parodied so many times was actually initiated by the director and Sharon Stone, but it wasn’t written in the script. When people want to talk about a sexual movie where the plot gets nearly lost amid the tantalizing reveal of, well, just about everything, then Basic Instinct zooms to the top of the list, or at least somewhere close. This is one of the movies that made young men breathe a little heavier and grown men do their best to hide their interest, especially when their significant other was around. In one of her biggest movies, Sharon Stone proved that she wasn’t just a worthwhile actress, but that she was capable of playing a seductive temptress that had just about every man hitting the rewind button repeatedly.

Here are a few other movies to consider if you like Basic Instinct.

It hasn’t really been talked about for a long time now, but this movie was actually pretty funny since it spoofed several movies, including Basic Instinct, and created a story that was likely bound to be a one-and-done kind of deal. Samuel L. Jackson and Emilio Estevez created a workable pair when it came to comedy but after everything that was seen in this movie, one had to wonder what else they could possibly do to top it.

One has to wonder how many people really get the idea of ‘survivor’s guilt’ when watching this movie instead of blaming Hedy for being absolutely out of her mind. The level of obsession that Hedy goes through to try and keep Allie in her life is definitely horrifying since she actively kills or tries to kill everyone that Allie cares about.

It might be kind of disturbing to find out just how many people related to this movie when it came out since the act of cheating on one’s spouse isn’t a new idea throughout the world. Sad to say, a crazed and rejected individual that starts stalking the person that slept with them and then ditched them isn’t either. But this movie definitely took things to a level that people haven’t forgotten yet.

7. Sleeping with the Enemy

One has to admit to being impressed by the lengths that Laura has gone to in this movie after doing what she could to escape an abusive marriage since it’s not everyone that hatches such a great plan to fake their own death and then move on. But those that are obsessive and possessive tend to have their own way of holding on to what they want. The only thing about this movie is that Martin seriously underestimated Laura.

Sometimes intervention and a nice, quiet party are best to get someone to look at their life and reflect on it. But if you have the means and deem it necessary, why not put your sibling through hell and make sure that they might be scarred for life by the thought of having been ruined in every conceivable way? It’s a thought at least.

This is one of the biggest fears that any parent is ever going to have when it comes to their kids, and yes, having daughters tends to make it so much worse as the expectations that society places on young men to be protectors and young women to be protected has a big hand in this. Protecting your kids is always a priority, no matter how old they get, and hoping that they find someone to share their life with that’s not a psychotic nut is part of that priority.

There is a double standard in movies when it comes to a younger individual having a crush on an older man or woman. In this case, the young woman could have very easily ruined the older man’s life and came perilously close to doing so.

Has anyone ever noticed how Michael Douglas finds himself in these types of movies so often? This time around he still has a big issue with a woman, especially considering that after rebuffing her sexual advances she decides to make life very hard for him. While it’s not a shot at anyone, the ‘believe the woman’ trick definitely plays out unless there’s evidence to the contrary.

The main character in this movie isn’t that complicated, she’s just plain old selfish and wants what she wants. When Suzanne is told by her husband that it’s time to step down from her dreams though, what she wants kind of changes gears as she manipulates a group of younger folks into solving the issue at hand. The only problem with this is that she doesn’t exactly think things through.

1. The Hand That Rocks the Cradle

The story isn’t really convoluted but it does take some telling since when the wife of an obstetrician that’s disgraced after he molests one of his patients, who reports him shortly after, she also closes her own child. Deciding to go after the woman that ruined her husband’s reputation and drove him to suicide she then decides to change her name and pose as a nanny. The takeover of the woman’s family doesn’t go quite as planned, but it’s a horrifying attempt all the same.