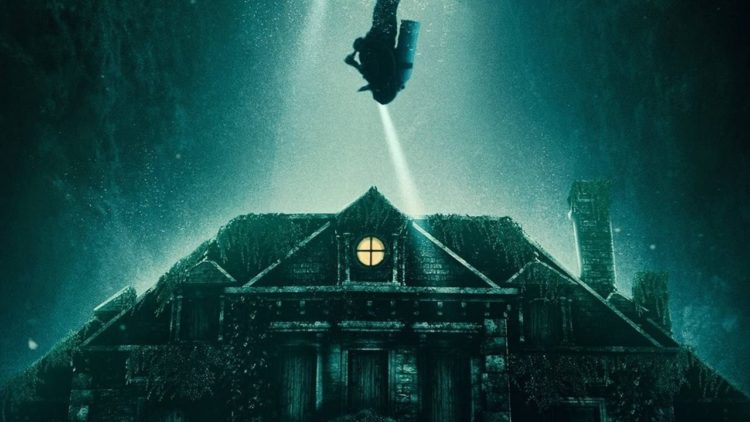 Some people are adventure junkies, and some are just along for the ride. That kind of describes the couple in The Deep House perfectly since Ben and Tina, two YouTubers that are all about delivering haunted house material to their viewers, are not entirely on the same page in this movie. While they both enjoy what they do, it becomes kind of obvious early on that Ben is the jokester and the type of guy that enjoys giving the fans a good jump scare in their material, while Tina is all about entertaining people, but has to put up with Ben more often than not. When they learn of a submerged and supposedly haunted mansion in France, they make their way to the location only to find that it’s a crowded tourist site, which works against their interests until they meet a local who claims that he can take them to a secluded part of the lake under which the house rests. The house’s status explains that the area was intentionally submerged to avoid the continually devastating floods that were common to the region.

When the local takes Ben and Tina to the location, the couple descends into the depths of the lake where they eventually find the mansion. What they notice right away is that it appears to be in immaculate shape for having sat at that bottom of a lake for so long. As they find a way in one easily gets the idea that it’s time to simply get going and not worry about the YouTube channel, especially since the mansion is locked up tight, as though someone was attempting to keep from getting in, or out. It might sound a bit corny, but the whole idea of being underwater and seeking to enter into a home that no one had even heard of in years and years does sound like a huge setup. And yet, even though this is most clearly a setup, there’s still the feeling that things haven’t become entirely too contrived yet.

After entering the house Ben and Tina manage to make their way around, taking in a room at a time as Tina becomes unnerved before Ben, feeling that there’s something wrong with the home. There are plenty of signs that something is off, especially given the strange markings they find carved into various surfaces, but Ben is adamant when it comes to gaining the type of material their viewers are looking for, and pushes on. Even when he thinks he’s seeing things he doesn’t bolt, as his adventurous spirit is more than enough to keep him moving forward. When the couple comes to a room that’s been blocked off with a massive crucifix, however, both of them decide to enter the room and find the one sight that should have sent anyone bolting from the house. Two individuals that are bound and masked in a type of torture device await them, and it’s at this point that the audience is allowed to gain even more information on the house, and the people that have been discovered.

The history of the place is bound up in the actions of a family that were abducting children to be used in satanic rituals, at least until the townsfolk rally together to bring their own type of justice to the family by binding them in their own home. While their son gets away, the rest of the family is handled by the townsfolk. As expected, once Ben and Tina remove the strange masks from the faces of the two chained individuals, they wake up and start to chase the couple through the mansion. As Ben and Tina make their way through the massive, darkened dwelling, they become separated, as one might expect, and Ben eventually becomes possessed and tries to convert Tina, but she ends up stabbing him and escaping the house. Sadly, she doesn’t reach the surface since the entire time that the couple was trying to escape, their air supply was dwindling rapidly, and before Tina can reach the surface, she drowns. If the audience is paying attention during the movie they’ll figure out that the local that brought the couple to the lake was the son of the couple that was chained up.

What this means is the son was still doing the work of his parents by encouraging divers to make their way down into the lake, where they wouldn’t be coming up. The question now is whether or not the parents would go back to their confinement to lay a trap for the next divers, or if they’d be lying in wait. That would be an interesting thing to find out to be fair, but it’s easy to think that this movie probably won’t be getting a sequel any time soon unless someone is ambitious enough and can come up with a great script.