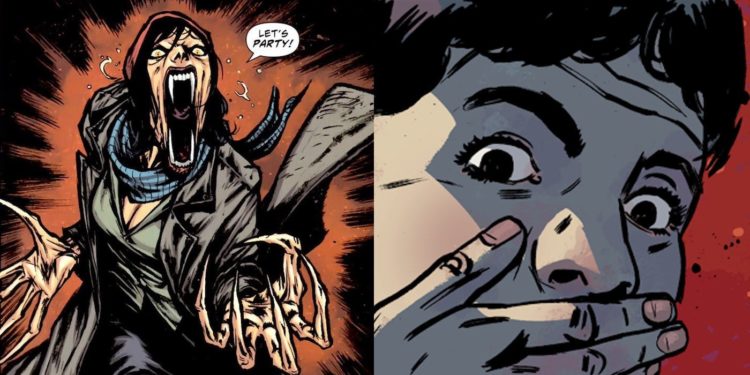 Horror comics don’t seem to get the same respect they used to back in the day, and when it comes to adapting them to the big screen those that do make it tend to seem warped and twisted in a way that fans have often stated is not what they were expecting. But as the methods and techniques used for such films continue to improve and more directors start paying attention to the source material such movies are starting to get better and are hitting the big screen with a great deal more accuracy so that people can enjoy them. But for all the comics that are out there that do get selected there are a lot more that seem like they might be a little more worthy of the chance. It takes a while to really get noticed with as much material as there is to go through, but perhaps those listed below could warrant some attention.

It’d be interesting to see these comics made into movies.

For those that were fans of True Blood this might seem like a highly popular choice since it’s got the longevity that’s need and its own brand of mythology that should be easy to transfer to the big screen. Vampire movies are still a big thing in the theater and quite honestly this comic is dark enough, horrific enough, and has the kind of story line that might make any reader want to petition to see it as a full-blown movie once they’ve read through an issue. The whole thing is like a glorious train wreck that plunges the reader into a dark and twisted world where the chaos and violence don’t seem to end, and the reader might not want it to.

If you took Buffy the Vampire Slayer, Dawn of the Dead, and ever teen-slasher flick you’d ever seen and tossed it in a blender with a dollop of satanism, zombies, and a sprinkling of other villains and ghouls you’d probably get Hack/Slash. Cassie Hack is just awesome as she has all the skills of a slayer and none of the teen angst that seems to slow a story down every so often. With her sidekick Vlad she takes on just about anything and everything you can imagine and she does it in a smash and slash manner that is kind of light-hearted at times but is still so wonderfully gory in its greatness that you don’t want to stop reading.

This comic is great since it’s not just about the world-destroying asteroid that’s hurtling towards earth, but the fact that the asteroid is filled to the brim with all types of unknown horrors that will gladly finish the job of eradicating humanity if there’s anything left. And that’s not the entire scope of it either, if the asteroid hits earth it will wipe out all human life no matter what, but it will have to beat the inhuman inhabitants of a secret lab to the punch first. The overall scale of this comic is so grand that you don’t know which way to turn and which end would be worse as you read along and try to sort out just what’s going to happen and if humanity is doomed no matter which way they turn.

Gore, death, mayhem, and the gritty, baked-on texture of a grimy and hopeless horror film is what this feels like, and fans have responded in a way that seems to indicate that they love every page of it. This comic is absolutely relentless and gives rise to the thought that nothing is ever going to get better for the characters and that there is no shining star to follow or light at the end of the tunnel for anyone. It’s simply a title that inspires nothing but dread and is willing to bring the reader to the brink of the type of horror that can taint the mind of anyone be they young or old. That’s why a movie about it would be absolutely off the chain.

Imagine having a nightmare and committing it to a comic book and this might be what could inspire a story like Wytches. The story follows Sailor, a troubled young girl, as she and her family try to adjust to their new life in New Hampshire. Unfortunately she soon discovers that the woods near her home are plagued by a clan of creatures that quite literally want to eat her. The visuals and the story line in this story are simply horrifying enough to make the reader want to keep the light on if they’re reading at night. The psychological horror of the story is even worse as it can easily lead to sleepless nights upon perusing the pages. All the better to make a movie, so as to make certain that the audience remembers just why the dark scares them so much.

There are a lot of comics that should be made into movies. Let us know what some of your favorites are.