Home
Entertainment
Comics
Thor vs. Hercules in the MCU: Let’s See It 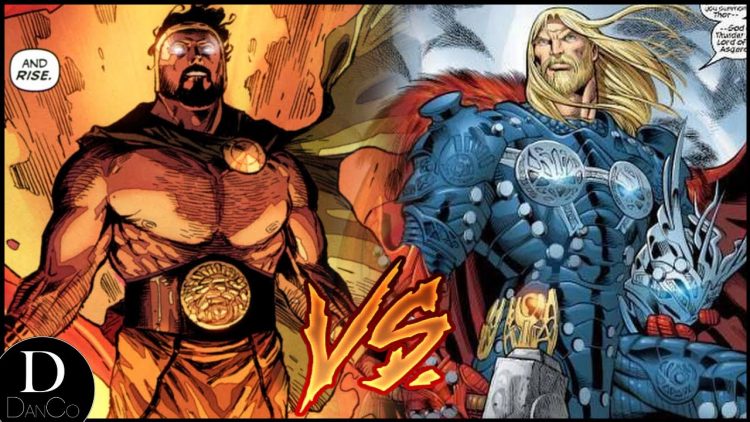 This is the kind of battle that could level a city if it were allowed to go on for too long, especially if both combatants were beyond reasoning and were simply trying to end each other. But a death battle between Thor and Hercules, in the Marvel Universe, is something that doesn’t happen since not only are they friends, and have been for a while, but such a match would cause way too much collateral damage. Given the fact that both characters are all about protecting humanity and the planet earth, a fight between them isn’t going to happen on earth, nor would it happen anywhere else if they knew that the place was inhabited. The fact is that despite their destructive power, Hercules and Thor are both heroes and are self-aware enough to know that such a battle would be too much for any landscape to hold up against. But there’s also the other fact that was already mentioned, they’re good friends and have been for a while. They weren’t always so friendly, and it would appear that the MCU is setting up an opportunity for the two super-powered individuals to come to blows.

The MCU is changing things up, so it’s hard to say who would take this fight.

If Thor were to reach his full potential and become Rune King Thor it’s very possible that he could dominate Hercules without too much effort since this form would allow him to tap into the kind of power that would be a little too devastating for Herc to deal with. But in a straight-up match between the two, it feels as though the MCU should still respect the idea that these two are evenly matched for the most part, even if there are plenty of people who think that Hercules is a bit stronger than Thor. Even saying such a thing is enough to stir up a debate, but at the same time, one has to imagine that Hercules, who is the son of a god as well, could have an advantage that Thor doesn’t have.

How would this factor into another Avengers movie?

It’s a big hope that those who are behind the story for the MCU would see how this would build into another Avengers movie quite easily since while Thor is a founding member of the group, Hercules became a very common sight within the pages of the Avengers in the comics. The group has seen members come and go over the years, but there have been mainstays that have managed to stick around long enough to become legends among the earth’s mightiest heroes, and Hercules is one of those that has been a dedicated member of the group for a long, long time. Pitting Thor and Hercules against one another could be one of several ideas that could bring the next Avengers movie into play, and could strengthen the group in a way that would keep them interesting and dynamic enough for people to enjoy for a while to come. It’s fair to say that this wouldn’t be a permanent solution, but there’s a chance that the changing of the guard in the Avengers will continue to happen, and therefore the addition of various characters that people recognize would be a wise move.

Would this be the last Thor movie?

That’s debatable since a lot of people were thinking that Love and Thunder would be the last one. But since it was stated on screen that Thor would return, it’s not hard at all to think that this could possibly happen, especially given the post-credits scene. If Zeus is setting Hercules on Thor, then there’s bound to be a battle for at least part of the movie, and the epic struggle is bound to end in a way that’s going to put the two men on the same side. Both of them are all about saving and helping people, but both of them have a great deal of pride and ego and that doesn’t always mix. The fights that have taken place between Thor and Hercules have been epic, especially since the power they’re bringing to such a bout is the type that would not be forgiving to anyone within the immediate vicinity.

This would be a great fight to see in the MCU.

Out of all the fights that have come along in the MCU, this would be one of the more memorable ones to be certain. Depending on how this was handled it feels fair to state that it could be a fight that would go down as one of the more memorable ones in the franchise. It could even be said that it might be a fitting end to Thor’s presence in the MCU unless Chris Hemsworth was firmly set on sticking around for a while longer. If that’s the case then it could be that the Avengers might have a couple of valuable assets to draw from in the years to come.