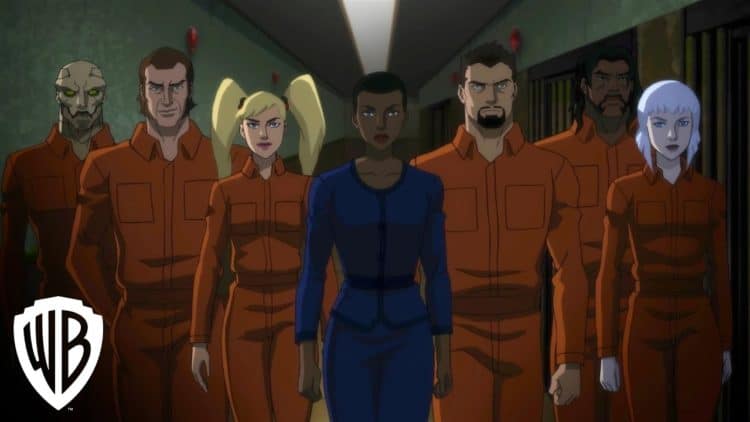 One thing that’s been established with the Suicide Squad is that they don’t disappoint when it comes to the type of action and humor that they’re often seen to deliver. In this animated feature, a version of the squad including Deadshot and a few others are recruited to retrieve a flash drive containing information that Amanda Waller desires. Only Deadshot ends up surviving the mission once it’s all said and done with, as he mercy-kills one of the squad members as Waller is about to detonate the implant located in her neck. It’s already been established how brutal Waller is since the squad was introduced, but when it’s established that she’s been diagnosed with a terminal illness, Waller finds out about a powerful artifact that can help her avoid the final judgment that she’s no doubt certain to face when she dies. A literal ‘get out of hell’ card that can send the bearer to heaven regardless of their sins. It doesn’t take long for Waller to gather another group of criminals under the banner of Task Force X once again to retrieve what she wants.

This time around isn’t much different from any other time as the squad still has to abide by Waller’s rules and always remember the bombs implanted in their necks. But this time around, while Deadshot starts as the leader, he’s forced to work with Captain Boomerang, Harley Quinn, Coppherhead, Bronze Tiger, and Killer Frost. Like always, the squad is made up of those that can get along with each, and a couple of people that aren’t exactly friendly toward one another. Bronze Tiger and his upright manner grate on Deadshot continually, while Killer Frost is more or less ready to step away from the group at any given moment as she’s convinced that they’re a bunch of morons.

But Task Force X isn’t the only group that’s on the trail of the card, which was in the possession of a man that had once been given the mantle of Doctor Fate. Unfortunately, after fighting Reverse Flash, Blockbuster, and Silver Banshee, the squad finds that Steel Maxum has already lost the card, which is why he lost the mantle of Doctor Fate and became a male stripper. The card was taken by Scandal Savage and her lover, Knockout. Scandal’s father, Vandal Savage, is seeking the card for himself, but it becomes obvious very quickly that everyone is seeking the card for their own use. Killer Frost is eventually captured and has her explosive device removed by Reverse Flash, who then uses it in an ambush against the squad, which ends up injuring Bronze Tiger. In the meantime, Vandal Savage has Professor Pyg sew the card into his chest, leaving it nearly impossible to remove the card without killing him, meaning that Vandal would be able to use the card’s magic to save himself. But when the fighting heats up, Vandal kills Knockout, and Professor Pyg, and then confronts the squad as they have to fight Vandal and Reverse Flash and his group. At that point, Killer Frost turns on everyone and attempts to gain the card for herself, which creates a melee situation in which she incapacitates the squad and kills Blockbuster.

She’s then attacked by Copperhead, whose device is triggered as he and Frost are killed in the blast. Vandal is killed after Reverse Flash retrieves the card, as he intends to use it after explaining that the Batman of his timeline shot him through the head. He survived by using the Speed Force in a manner that prolonged his life, but would eventually negate him from existence. Eventually, Reverse Flash is killed, and Deadshot gives the card to Bronze Tiger, who was dying of wounds inflicted by Reverse Flash, thereby allowing Tiger to go to heaven. When Waller shows up at the end, Deadshot gives her the card, which is now useless unbeknownst to Waller. In a way, this is poetic justice since Waller is by far worse than several villains since her manner is that of a woman that will literally do anything to get her way, and won’t care how many people have to die so that she can maintain her control over a given situation.

The animated version of the Suicide Squad is actually a little more enjoyable than the live-action versions, but not by much since the most recent version released by James Gunn is still a lot of fun. But as it tends to happen often, animation can give live-action a good run since there’s a lot more that can be done in animation without having to spend extra money on special effects. Plus, the different characters that tend to show up in the squad from time to time. If the movies could diversify a little more often it might be that the live-action version would be the best hands down. But as it stands, the animated version is still able to hold its own.