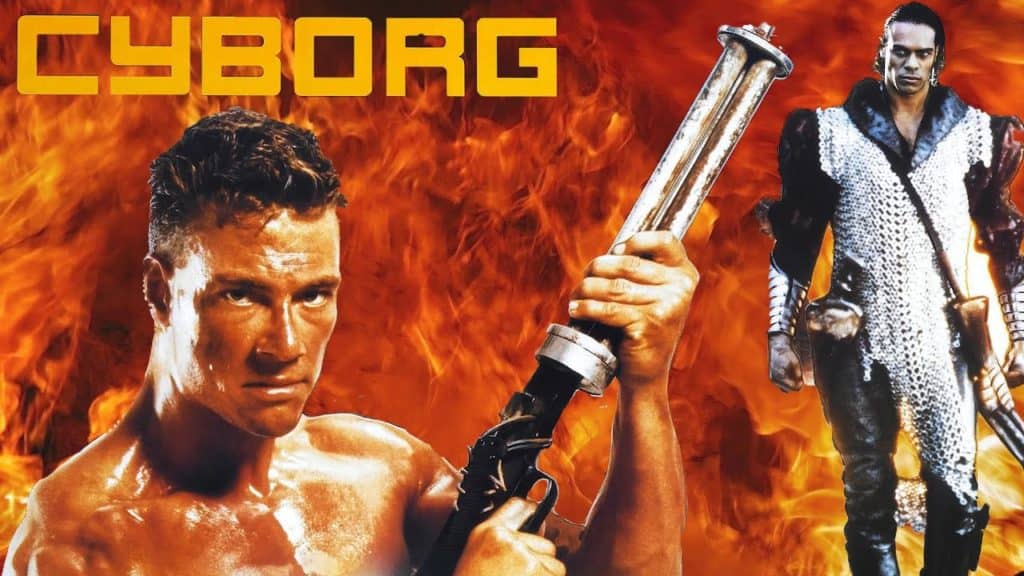 The need to reboot a movie is kind of a touchy thing with a lot of people, especially since some actors put in such great performances even if the movies didn’t do particularly well. Released in 1989, right before the 90s started to take hold, Cyborg was a pretty straightforward movie that had a few moving parts that didn’t always appear to fit as well as they should have. It’s the type of movie that’s definitely perfect for an actor like Jean Claude Van Damme, who back in the day was one of those that was able to make a good living on his ability to flex his muscles and look good for the camera. It does help that he had a noble goal in mind despite the fact that his character, Gibson, was someone that was considered to be a bit of an outsider that was only to be used when the situation was that serious and couldn’t be avoided. The whole movie revolves around the idea of finding a cure for the living death, a virus that wiped out a large portion of humanity.

In terms of the premise, it’s kind of generic to be certain, but it’s the type of movie that was popular in the 80s and didn’t challenge anyone too terribly much. Of course, that still happened when one considers that Fender, the main villain, is the kind of guy that looks like he might rip your heart out of your chest and take a bite out of it while you’re watching. But at the same time, he’s not exactly a skilled fighter, as he relies more on intimidation and the brute force that he uses to dominate others. Gibson and Fender do have history, since Fender killed the woman that Gibson loved, along with the woman’s siblings, while in the process taking one of them, Haley, as a part of his crew. In other words, Fender is the type of villain one might have expected back in the 80s, big and tough and definitely capable of scaring the living hell out of people, but also not that deep of a character.

When Gibson takes on the job of protecting Pearl, an android that’s carrying the information needed to save the human race from the plague, he immediately runs afoul of Fender, since the villain is attempting to take Pearl so that he can control the cure and keep the world that he actually enjoys. Fender is the type of villain we don’t get enough of anymore, for good or ill, since he’s all about being bad without any complications or drama that was needed to flesh out his character. If a reboot of this movie did come along it would be great to see Fender’s part played in much the same way since complicating the villain too much tends to make people feel sorry for the bad guy and yes, that does tend to make things a little harder to accept. It’s not such a bad thing to feel something for the antagonist, but it does appear that some folks are fully ready to ignore the idea that some people are simply born bad, no matter how much they want to argue the matter.

The fact is that Fender is a pirate, and he wanted to remain a pirate because he enjoyed the chaos and the mess that the world had become. He was the type of guy that thrived on the pain and misery of others, and not because he was miserable, as far as we knew, but because he simply loved the fact that he could hurt people and keep on hurting them. There’s not a lot of analysis on this guy, and that’s what made him a great villain, albeit an incomplete one as well. But perhaps a reboot could fix that little problem, and possibly show where Gibson came from as well since he’s obviously a man with a past that doesn’t want to delve into it too much. Perhaps another Cyborg movie could even show flashbacks so as to describe how the main character became a slinger, someone that’s known as a type of mercenary that can help people in need.

The 80s movie was definitely campy in a lot of ways, but it was still great when it came out since JCVD enjoyed a pretty healthy run of popularity that saw him become one of the most-watched action stars of the era. If someone else could come along with the vision and idea to reboot this story it might be able to do very well in the current era, especially since the ‘end of the world’ types of movies are still popular so long as they’re over the top and out of control or filmed in a way that feels provocative without being preachy.