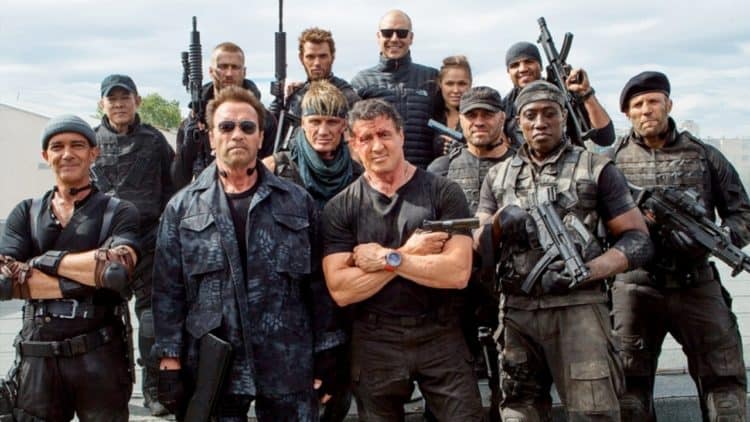 Since the first Expendables movie, it became obvious that Sylvester Stallone was attempting to lump together some of the biggest names in Hollywood, particularly those that had been involved in one action movie or another. The effect was appreciated by a lot of fans and has been in the past two movies as well since Stallone has stepped it up and included individuals that no one saw coming, such as Ronda Rousey and Kellan Lutz, along with several others. Even Mel Gibson was a nice surprise, even though he’s been a big action star over the years. But with the fourth movie supposedly already coming, it’s a wonder as to whether there might be a fifth, as it kind of appears that Stallone isn’t ready or willing to retire. But if a fifth movie did come along, and nothing is saying it won’t, there are a few stars that people would love to see emerge to help cap off another entertaining set of adventures. One thing Hollywood isn’t short on is action stars.  Here are five action stars that we’d love to see in another Expendables movie.

Maggie was kind of a surprising action star at first since, despite her size, which doesn’t mean much given the diversity between action stars, she felt like someone that might be more adept as a supporting star no matter what type of movie she was cast in. But in recent years, Maggie has shown that she’s more than capable when it comes to getting in on the action, and she’s someone that can step into the main role and become the star. While she’s not quite as forceful of a personality as many others, an ensemble cast would be a perfect way for her to stand out just enough to be seen as a welcome addition.

Timothy was a welcome surprise in The Mandalorian season 2 as Cobb Vanth, and he’s not really the same type of action star as many of those that have starred in this movie. But as a villain or a kind of rogue, he would be great in an Expendables movie since he’s displayed the kind of intelligence and acting ability that would put him on part with several actors that have come and gone throughout the years. He also has the kind of cool and measured attitude that would allow him to keep up with the rest of the cast. Plus, his work in the Hitman movie was impressive enough to make him appear legit as an action star.

This goes without saying really. Dave is an action star without question since after leaving the WWE, which is a ringing endorsement for any action star, he’s been on a roll when it comes to his part in various action movies. It’s also been seen that he’s a little more complex than people realize too though, as his attempts at drama haven’t been without merit. One thing about his acting though is that is still a little bit stiff, but this can be chalked up to the idea that this is simply his personality. His acting is good enough to make him a part of one of these movies as either an antagonist or a protagonist.

This is another no-brainer when it comes to selecting stars who would be great for an Expendables movie, and it would be great since Jason and Stallone have worked together in the past in the movie Bullet to the Head. As a villain, Jason Momoa is kind of scary to be fair, but as a hero, he’s someone that often looks grizzled and kind of bored since he’s not the typical type of hero, he’s someone that does something because it’s the right thing to do, or because there’s no other viable choice. Even as Aquaman he’s presented an overall appearance of someone that isn’t always ready to jump into action. But as a mercenary or a villain, it does feel that Momoa is well-suited since he has the look of someone that would be comfortable taking the side that was more in line with his overall goals.

It’s kind of obvious that if Keanu was even considered for one of these movies that no one would even think of fighting it. Reeves is, simply put, a fan favorite that many would love to see in just about anything since he’s proven to be one of the best actors of our time. Thinking that he could be a villain or a hero is rather easy since his calm and cool demeanor is enough to make a person think that he could be the type of character that might be a villainous mastermind or an ace in the hole that the group might need.  The Expendables does manage to open the door when it comes to using action stars young and old.