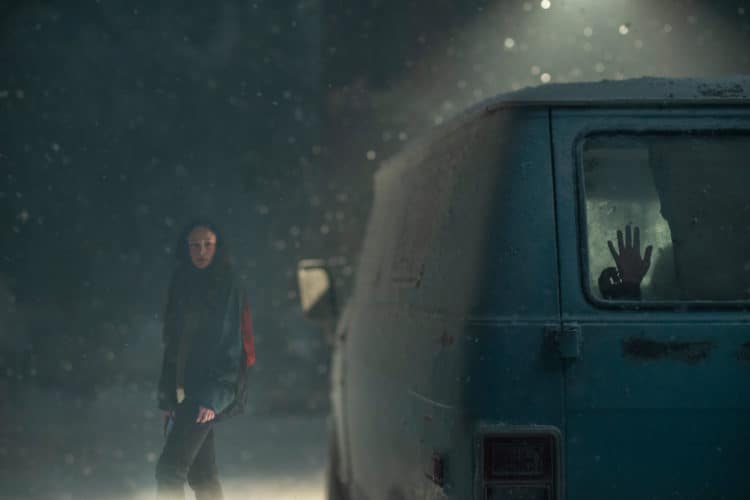 To be fair, it was kind of tough to see this one coming since it started in a manner that was typical enough, but it came up with another typical shock that became the type of story that a lot of people have seen, but still enjoy. No Exit sounds kind of like it would have the same fundamental idea as a movie like Escape Room or something similar, but the simplistic design of the movie is kind of what makes it worth watching. Darby is a recovering addict and a cynic of the program as it’s revealed since she’s not exactly humble or changed by her experience. But when she learns her mother is in the hospital she tries to find a way to get out of recovery so that she can go see her. The flip side of this is that her sister, Devon, tells her to stay away, as the feeling is that she’s done enough damage to her family and isn’t welcome at the hospital. One can imagine that Darby doesn’t take kindly to this, as she breaks out of rehab and begins making her way to Salt Lake City.

Unfortunately for Darby, she finds that her path is blocked by a snowstorm, meaning that she needs to stop at a visitor’s center that has been opened to receive several other individuals that Darby meets as she reluctantly stops and gets to know the people in the room. Unfortunately, upon making her way outside to see if she can find reception for her phone, she hears a muffled scream that is coming from a van that’s parked in the lot. At this point she’s already met Ash, Lars, Sandi, and Ed, the others who are stuck with her in the visitor’s center, and it’s been established that all four of them have their own personalities. Lars is a shaky, nervy mess and also a sore loser, Ash is a cool individual that appears nice, and Ed and Sandi are a couple that appears a bit cagey but are solid enough to start with. Sandi appears a bit standoffish, but this is a surface appearance to start with. Once Darby finds that there’s a young girl in the van, tied up and gagged, she has no idea who to trust any longer.

Unfortunately, the only person that’s hard to trust is Lars, since his nervous and shaky and doesn’t get along with everyone. But if there’s any rule that should be remembered in a movie like this, it’s that you don’t rule out anyone as a suspect until the end credits start rolling, if then. In any case, as Darby goes about trying to find a way to free the girl, Jay, and has to find a way to free her while staying ahead of the kidnapper, who she believes is Lars. But those that have watched enough thriller movies know that there’s always something more to come since otherwise, it’s fair to think that the movie would be way too boring. But the twist does come along after Darby confides in Ash her suspicions of what Lars is up to, only for Ash to reveal that he and Lars are working together for their Uncle Kenny, who is involved in human trafficking.

Worse than this however is the fact that now there are two capable individuals set against Darby, who does everything she can, including tossing the van keys into the snow, to keep the two men from taking Jay and heading out. When Darby holes up in the visitor’s center after escaping from Ash and Lars, the two threaten to burn the center down if Jay isn’t returned to their custody. Of course, another surprise is waiting when Jay wakes up and recognizes Sandi as her family’s maid. It’s revealed not too long after that Sandi gave Lars and Ash access to Jay’s home to kidnap her, and has been in on the whole thing from the start. Ed is just as surprised as Darby, but Ash ends his life by shooting him, shortly before he shoots Sandi as well. after this, he does what he can to find out where the van keys are by torturing Darby, which includes putting a nail through her forearm and threatening to put a nail through Jay’s hand.

Darby ends up outsmarting the two men momentarily, which ends up getting Lars killed as he takes a nail to the head. Her escape isn’t quite as smooth as Ash uses the nail gun to blow out the tires on the car she selects, and then to kill a police officer that comes to check on the disturbance. Long story short, Darby is near death when she stabs Ash through the neck, and eventually, she’s seen back in rehab. Just before the credits roll, her sister Devon is seen in the visiting area waiting for her, prompting the audience to think that Darby’s life might be taking a slight turn for the better.