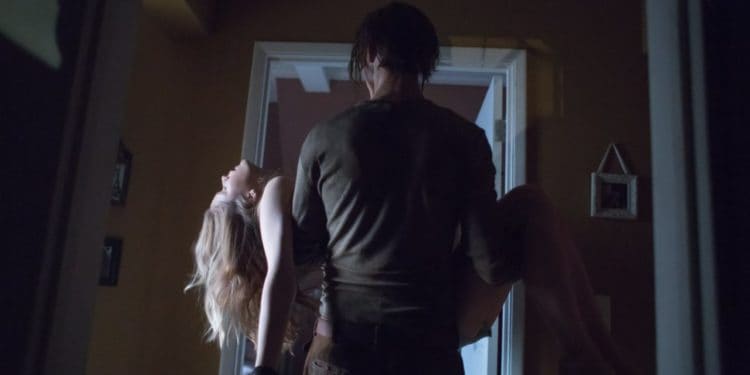 How often do you hear strange noises in your home? Do things appear to shift or move entirely when you’re out of the room? Some folks would get creeped out just reading about it, but the idea that such noises and instances weren’t natural byproducts of a house settling or people idly placing things here and there is even worse. When Hannah and her widower father and his new wife move into a new home they had no idea that there was something odd about this home until much later, when things started to happen that they couldn’t fully understand. A good portion of the first act is taken up by the minor feud that they have with their next-door neighbor, who is from the very start a creepy and sleazy individual that doesn’t need a second look to determine that yes, he is a slimeball. And yet, while his skill with security devices is creepy and definitely goes a ways toward pointing to him as a villain, and one whose reveal was a little quick, the twist that came eventually was even more disappointing.

Hoping that this movie would have had a supernatural lean was kind of easy since a haunting is sometimes far more exciting than the idea that someone is living in your home. Granted, both are terrifying, especially since the latter is a far more difficult story to tell given that the dynamic of living in someone else’s home brings up certain challenges. But while the movie does fall short in a few ways, the fact that the main antagonist is capable of moving behind the walls and within the hidden spaces of the home is kind of eerie and yes, rather terrifying since the type of strength and agility needed to do some of the things that this character executed was, well, impressive.

But getting back to it, the story is that the family who lived in the house before Hannah’s had been found dead in an apparent murder/suicide case that had been written off and closed, even though it was a hard explanation to accept. Throughout the movie, it’s explained, kind of, how the home is a messed-up place that a lot of people have a certain feeling about. To Hannah, it’s a place she would rather not be, as it’s easy to understand how she would rather go back to her life as it had been. But while her boyfriend comes to visit her and she ends up bonding, eventually, with her stepmother, the issues in the house continue until it becomes evident that there is someone in the house. The creepy neighbor becomes less of a problem when he’s killed by the ghastly individual that finally reveals himself, as the creep is peeping on Hannah when David, the individual that lives within the walls, beats his brains out with a hammer, after wrapping a plastic bag around his face. Taking a long, hard look at this movie, it does feel as though this idea is sound and that it was given every chance it needed to become something worth noticing.

But where it kind of trips over its own feet is when it stumbles into the same idea that those who know or at least suspect that something is wrong within their environment don’t do something about it. This is the type of movie that a lot of people would yell at when trying to get the people on the screen to do something other than what a horror movie would demand, and would fail, like always. There are plenty of people who would watch this movie and think that it was well constructed and deserved a bit more credit. To be fair, the man in the house, David, does bring a strange and creepy element to the story, but once he’s revealed the magic of it all kind of fades since the supernatural lean might have offered up a bit more of a story that could have kept going, while the practical nature of the story was kind of ‘meh’, largely because it’s not only less than feasible, but it’s also something that feels like it was assembled as the story was being filmed.

This has happened before and some movies have made good use of it, but Within isn’t in that league and it wasn’t executed in a manner that would make it work. It’s not the worst movie, but it might disappoint a lot of horror fans simply because it’s the type that would keep them from wanting to see anything past David’s reveal. This is one of the many cases in which once the main antagonist is revealed, the rest of the movie becomes more than a little pointless since the reveal would have been better had it come earlier, or not at all. Yeah, it sounds weird, but it’s very possible.