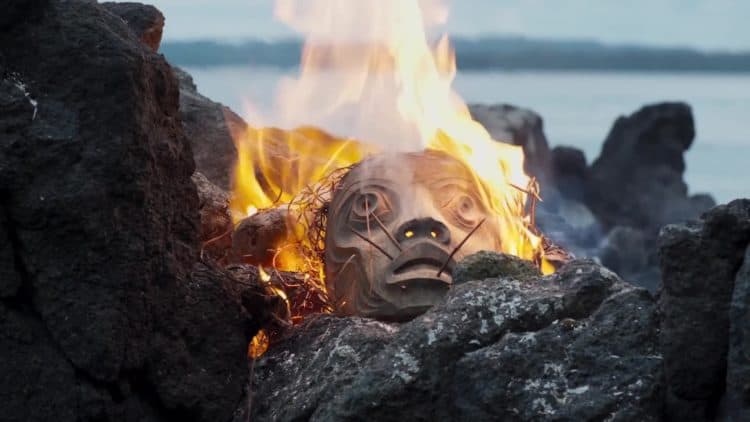 As far as odd movies go this is one of them that would likely fail to keep the attention of a lot of people unless they were into the type of horror that moves slowly and doesn’t rely heavily on jump scares. Edge of the Knife is a movie that isn’t exactly scary but does feel like a serious descent into madness as two families meet at a fishing retreat, a common enough occurrence in this story as it would appear. But when Adiits’ii, a nobleman within the tribes, accidentally causes the death of his best friend’s son, he runs off into the woods to escape the guilt. Unfortunately, this causes him to become a Gaagiixiid, which is a supernatural being that is driven by hunger. Adiits’ii becomes so deranged that he begins to eat whatever he finds, which at one point includes an urchin that he finds in a tidepool. One can easily guess what happens when attempts to eat the spiny creature, as several of the spines stick within his face, giving him a grotesque appearance that is quite horrific.

Trying to watch this movie in the hope that it will pick up is kind of hard since the point is that it doesn’t really do that. The story is a bit slow and the overall idea of it is something that brings to life a supernatural force that could have a lot of potential to be absolutely terrifying. However, the movie never really goes to the edge, no pun intended, since it stands as more of a cerebral horror movie, and even that’s a bit of a stretch. The fact that it was praised by many who watched it isn’t that confusing since from a certain perspective it’s fair to say that it might be seen as something that’s highly effective.

This movie definitely isn’t for those that enjoy the horrific and violent horror movies that twist people into knots and make them a bit anxious. The only real anxiety that comes from this movie is waiting for it to pick up a bit. Adiits’ii’s transformation from carefree individual to the horrific monster that lives in the forest and is one that’s a little bit confusing, but at the same time, it keeps moving forward in a manner that might make sense to a lot of people, especially if the culture is treated in a way that’s respectful and accurate. This isn’t a movie for those that want the hack and slash type of horror that’s bound to spill buckets of blood and guts, since it becomes more of a psychological journey through madness. Trying to get excited about this movie is a little rough, but sitting down long enough to get into this movie might test the patience of many horror fans since putting this on Shudder feels kind of confusing but not entirely inaccurate since there is a horror story to be told, albeit one that kind of falls short of the overall horror aspect. Many horror movies that work from a cultural standpoint have a kind of hit-and-miss track record, but the fact is that this particular movie feels heavier on the culture than anything.

From the imagery to the overall impact of the movie the cultural impact and the overall story managed to get the attention of several people, but why it’s being lauded as something great and provocative is a bit confusing. The story of Adiits’ii is one of a man that is charming and likable but is also a bit irresponsible since he likes to joke around while his friend Kwa is a little simpler and not quite as popular. The dynamic between the two men doesn’t remain the same throughout the movie, but it does become tense at one point since it becomes apparent that Kwa’s son might not have been his son, to begin with. It’s also established at one point that Adiits’ii is a bit less of a standup character as one might think since he can’t take responsibility for what he’s done and is, therefore, easier to revile than root for given that he can’t face Kwa. Some might want to argue for the character of Adiits’ii just as they’d argue that this is a worthwhile movie, but on both counts, it’s a little confusing.

When all is said and done the cinematography in this movie is one of the best aspects since from a cultural standpoint, the story is meaningful and does manage to convey what it needs to. But in terms of horror, it feels that perspective is the most important aspect, since unless one has the needed perspective then it might appear kind of confusing as to why this would belong in the horror genre. As a dramatic horror, it might be a worthy addition.