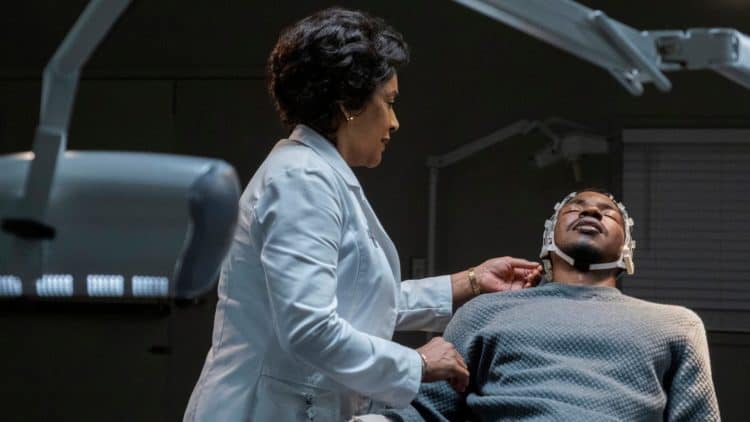 Anytime a movie employs something to do with the mind, memories, and the kind of thrills that make people cringe when they try to sit through them, one can bet that there’s going to be a seriously messed-up reveal close to the end. Black Box kind of delivers on that idea, but not in a fashion that would be considered traditional or even typical. It’s fair to state that switching one’s consciousness from one body to another is something that’s been done before, but the manner in which it’s done this time isn’t just creepy as hell, it’s disturbing enough that one has to wonder what kind of human being would ever think of doing such a thing to another person. The chills are a long time coming to be fair, but the confusion that grips the main character, Nolan, following a car crash that took the life of his wife and left him braindead for a short period is easy to believe since his actions and the manner in which his daughter takes care of him indicates someone that’s not quite all there.

But it’s when Nolan starts to see things, memories that aren’t his own, that things start taking a different turn as he begins to see visions. His confusion only grows as he starts feeling that he might have been a bad husband, though his friend Gary assures him more than once that he’s been a good man, a good father, and a good husband. Still, Nolan can’t shake the idea that the visions he’s seeing while visiting with Dr. Brooks, a specialist that he decides to speak to, are something deeper. When a horrible creature that he can’t understand begins to appear in his visions, walking backward and crunching and popping in every joint as it moves in an awkward fashion, Nolan continues to panic and find himself flung out of his own mind. Even the people he sees in his mind are faceless, frightening, and continue to freak him out.

It’s only when the truth starts coming out he begins to realize that he’s not the man he thinks he is, and in fact isn’t Nolan at all., Instead, he’s Thomas Brooks, a promising young MD candidate that had died not long before Nolan, the real Nolan, was in a fatal car crash. When Nolan was pronounced braindead, Dr. Brooks, who was still grieving over her son, uploaded her son’s consciousness, which she had mapped out long beforehand, to Nolan’s mind. The problem with this, apart from being highly immoral and unethical, was that a part of Nolan remained within the depths of his mind, and began to reassert itself, thereby causing a great deal of confusion as the two different occupants began to collide. Eventually, Thomas does manage to gain dominance over the unknown specter of Nolan at one point, but when he and his mother seek to expunge Nolan entirely, Thomas has a change of heart as he realizes that, during a previous meeting with his wife in Nolan’s body, he revealed to her who he was by stating facts that only he would know. Unfortunately, he also realized that his wife had effectively cut him out of her and their daughter’s lives, removing all pictures and memories of him.

As the audience is allowed to find out, Thomas was an abusive husband, and one night when he was being harmful to his wife, their daughter ran to stop him, only to be kicked away by Thomas. His wife was quick to push him down a stairwell only seconds after, killing him quickly. Upon remembering this, Thomas, who was primed to expel Nolan entirely from his own mind, stops and realizes his error as the voice of Nolan’s daughter reached both of them, begging her father to come back. At that moment Thomas did the right thing as he walked away, allowing Nolan to regain control of his own mind and body. Dr. Brooks is then brought up on charges and dismissed from the hospital, while Nolan returns home to reclaim his life and lament the loss of his wife as he and his daughter continue to live out their existence.

In the meantime, the movie ends with Dr. Brooks uploading her son’s consciousness to the machine she’d been using on Nolan, whereupon she sees the machine light up. Saying her son’s name she smiles upon looking into the apparatus. It’s tough to think of this as a win since the perpetrator was attempting to do something that a lot of folks might have at least given thought to, but at the same time the lack of morality in simply displacing a person from their own mind, and disregarding the idea that they had a child, is enough to keep people from rooting for Dr. Brooks. At the end of the day, this is a nice thriller, as it’s slow-going and allows people to catch up without going too quickly.