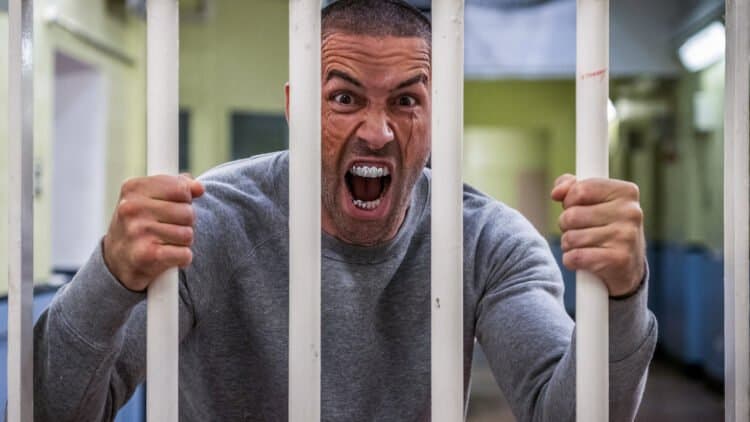 It’s nice to see a movie that’s straightforward and to the point sometimes since it’s a nice break from having to sit and watch things move in a way that might not make sense to those who are watching. There are a couple of hidden elements in Avengement, but not to such a degree that one has to give too much thought to the story to figure out what’s really going on. Cain Burgess is being given a police escort to see his ailing mother, only to be told that she’s passed away after her battle with cancer, which is understandably devastating. Taking a look at Cain, it’s fair to say that prison life has been a bit rough, but the truth of this doesn’t come into play until later on. The officers do relent and allow him to see his mother’s body, but on the way back up to the main level a struggle can be heard, and when the doors open, Cain is the only man standing as makes his getaway, thereby starting the movie and heading on to the next scene.

One thing that’s easy to recognize in this movie is that there is a lot of exposition, but the great part about this is that the action and the exposition do become intertwined in such a way that things don’t end up getting too boring to keep watching. At some points, it does feel as though the exposition does go over the top a bit since there are moments when Cain does appear fully ready to keep talking when it might be best to just shut up for a moment or two. But another thing to remember is that this does show the type of character he is, which means that he might start as kind of a fool, but his decision to confront those that are partly responsible for putting him in prison is a combination of gloating and cold revenge since Cain is kind of a talker.

But his need for revenge, and to talk about it, become obvious soon enough after he makes his way into a private bar, after knocking out the two bodyguards first of course, where he proceeds to order a pint and then antagonizes the men sitting in the bar. When the men in the bar decide to get aggressive, Cain grabs hold of a shotgun and incapacitates one of them before beginning to tell his story. As a brother to a local crime boss that specializes in making the lives of many people miserable, Cain’s initial role, as a boxer, is to throw a fight. When he can’t do that he asks his brother to invest in another scheme. When Lincoln says no to this, he gives Cain another job that makes him a part of his scheme. When Cain is caught after the inadvertent death of a woman he was meant to rob, he’s sent to prison where he’s attacked mercilessly over and over. This brutality eventually takes a great deal from him, as he loses several teeth, gains several new scars, and adopts the attitude that he has to fight to survive.

Going back and forth between his time in prison and the current era, Cain continues to tell his story as he waits for Lincoln to arrive at the bar. The constant brutality is revisited as it’s shown how he was given his scars, including the homemade napalm that is splashed on his face. One can’t help but think that a lesser man would break under such constant punishment, but  Cain appears to thrive as the daily fights continue to add years to his sentence, but they also continue to harden him as each new fight becomes more vicious than the last as the pain becomes a minor side effect unless someone finds a way to truly hurt him. Cain becomes a bit of a monster on the inside, only softening when his mother comes to visit him. When he finds out from one inmate that his brother has put a price on his head, which explains the constant beatings and attacks, Cain starts to think of a way to get out, and just before he’s allowed to go see his mother, he makes a deal with the police to give up his brother. Of course, things don’t go quite as they should, as Cain’s escape is shown again in greater detail as it’s revealed how he found the clothing he’s wearing and the money he needed to get around until he visited the bar.

Once Lincoln shows up it’s revealed that he did put the bounty on Cain’s head and that their relationship has never been that great. Once the fighting ensues, it’s shown that Cain is nearly impervious to pain, but begins to slow down as the damage takes its toll. Once it’s just Cain and Lincoln left, however, he kills his brother before walking out of the bar, where another set of flashbacks reveal that Cain, upon visiting his brother’s accountant, had the man allocate Lincoln’s money to the families and individuals that he had scammed over the years, leaving him only a little over a thousand pounds. His revenge complete, Cain walks across the street from the bar to collapse against an iron fence, where it’s implied that he might be done and therefore is now able to die content, though it’s hard to figure out if he lives or dies.