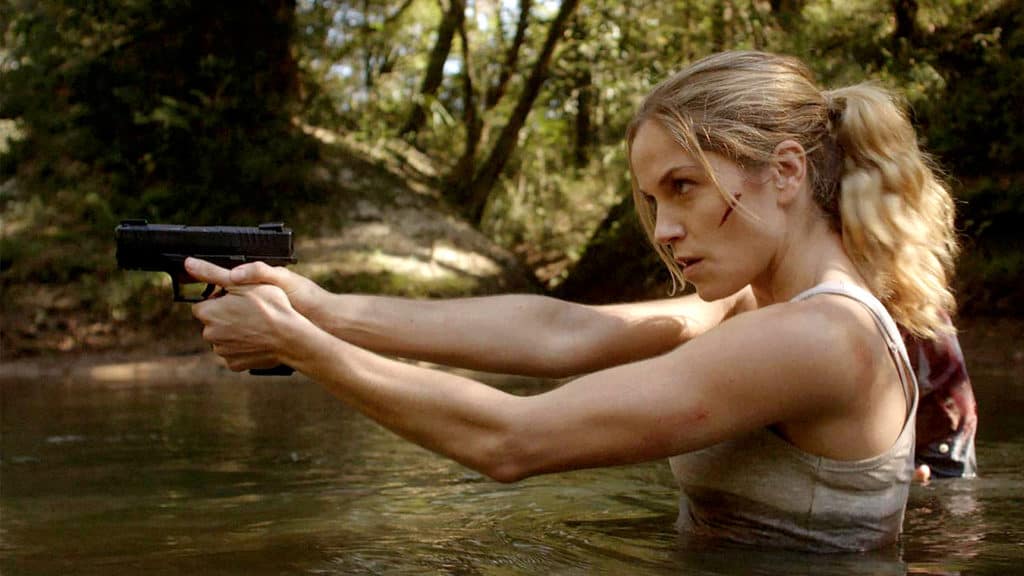 This is the kind of action movie that a lot of us might have enjoyed when we were younger and didn’t know any better, especially when it comes to gunshot wounds and how being injured really works. The lack of any real exposition is kind of refreshing until one realizes that what little forced exposition is in the movie comes a bit late and doesn’t always fit properly within the story. In short, Army of One is the kind of movie that a person might enjoy when they don’t want to sit and think about anything other than the action that’s unfolding in front of them. The movie isn’t the worst that’s ever been made since it obviously had a little bit of a budget to work with, but it’s the type that kind of ignores the necessity of showing the audience that wounds do tend to matter and that being blasted at close range with a firearm isn’t that big of a deal. In other words, it’s an action movie built for those that are in the mood to laugh or those that don’t know that much and are easily impressed by any type of action they see on the screen.

That is a little cynical, but it’s also deserved since from the acting to the action a lot of what goes on feels kind of forced and so over the top that it’s taken another turn in an attempt to do better. I know, that sounds a little confusing, but the point is that while the actors are trying, they’re trying a little too hard to make this movie work and it ends up coming off as a rather awkward attempt. But getting into the movie, we start out seeing two detectives entering a darkened home that, on the inside, looks like it might be the kind of setup that one might find in a horror movie. As the detectives search for those they figure might be in danger they’re both ambushed by knife-wielding maniacs, each of whom is wearing a deranged bunny mask. While one detective is taken down, the other is sliced open and then has to shoot his attacker, which prompts the detective to wake up, as he finds himself sitting in a jeep next to his wife.

The flashback is found to be real since the detective is still recovering from the wound, as is noted by the fact that he has to redress the wound a couple of times in the movie. But as the focus shifts between the detective and his wife, who has the appearance and the attitude of someone that’s bound to be a survivor in the movie, even without the various images that show this very thing. Making a long story short, the two run afoul of a heavily-muscled hick named Butch that gives them a great deal of grief when they stop in at a local diner owned by a woman that’s simply called Mama by everyone, and things kind of go from there. While the two are out on a camping trip they take a hike into the woods and come across what looks like a cabin that’s maintained and secure thanks to the bolts on the doors and the very well-kept appearance. When they’re found and captured though, but Butch and his cronies, they’re both shot after Butch finds out that one of them is a detective.

This is where things really start to enter the head-shaking stage since Brenner, the name of the wife, is an Army Ranger and tough as hell, and the shot that Butch thought finished her only grazed her skull and knocked her unconscious. When she wakes up in a gully next to her dead husband it’s kind of obvious what she intends to do as she makes her way back to the campsite, only to find that it’s been removed and all of their belongings have been taken or destroyed. Finding a hatchet stuck in a nearby tree, Brenner decides to get her revenge by killing the clan that killed her husband as she ends up blowing up a still, killing several men far larger and stronger than she is, and finally kills Mama at the end of the movie, making good on a promise that her bullet would be the last thing Mama sees before she died. One has to wonder what they’re really watching when sitting down for this movie since a lot of it is kind of ridiculous and shows that it might have had a budget to work with, but it wasn’t anything to write home about. In terms of action without too much exposition, there was plenty of that, but when it came to the cinematography this movie needed a lot more help than it received. If you want action without any logic or sense to it this movie wouldn’t be a bad choice.