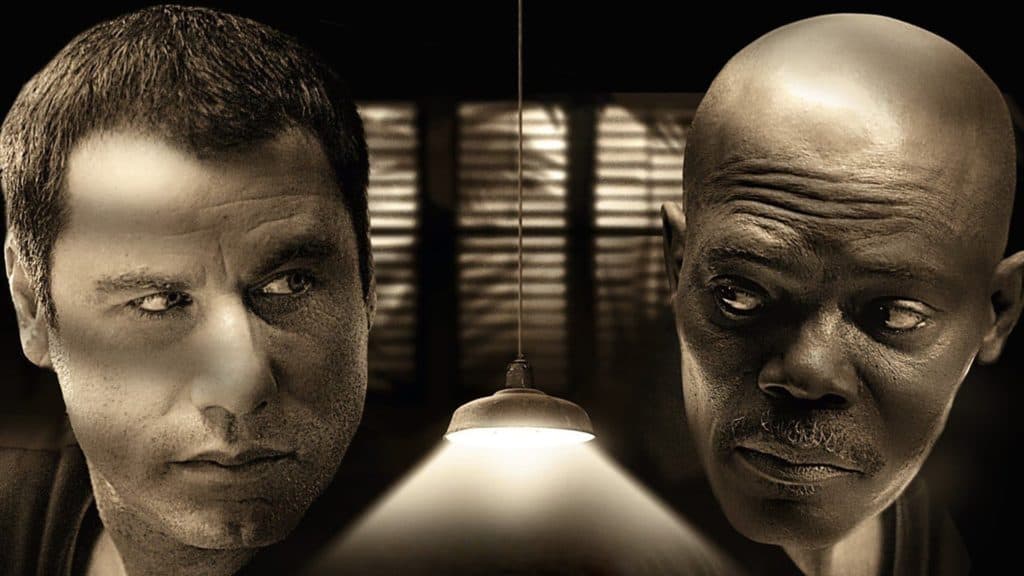 Maybe due to this being a military movie that deals with covert ops and drug-running, or maybe due to the idea that it came out at the wrong time, Basic is the type of movie that feels as though it missed out on a lot of hype that could have made this into a bigger deal. It’s also the type of movie that makes it clear that the critics aren’t quite as sophisticated as they thought since there are plenty of other movies that are far more convoluted that have been called ‘masterful’ and many other descriptive words when in truth some of those movies that gain so much praise aren’t really that great and are way more confusing than they need to be. The thing about Basic is that it’s not really that confusing if a person is paying attention and has an idea that each time the story is told it’s being ‘told right’ from one perspective or another. Remember playing Telephone as a kid? This is kind of like on a slightly bigger scale since each story that’s told within this movie is contributing to a narrative that is, admittedly, a little more twisted than some, but is still fun since it makes a person wonder which story is real.

There’s bound to be at least some debate as to the logic of this movie since it would appear that the whole story could be boiled down and simplified in a way, but in the spirit of making movies and giving them enough action to satisfy the needs of the audience, Basic starts out with a controversial scene in which soldiers that should be allies are shooting at each other in a live-fire exercise that was meant to pit them against the elements, not each other. But as the story moves along, we get a better understanding of just how many layers there are to this tale and why the differing viewpoints are important.

John Travolta’s character, Tom Hardy, a former Army Ranger and DEA agent, feels like kind of an outsider to start with, but as things go along it becomes evident that he knows more than he’s letting on. Understandably, Connie Nielsen’s character, Captain Julia Osborne, becomes increasingly frustrated with Hardy since he doesn’t appear to be taking the investigation seriously. When the mention of Master Sergeant Nathan West, played by Samuel L. Jackson, is brought up, things take another turn since West is known for being an insanely tough and demanding individual, and also knew about the illegal operation that was being conducted by two of the soldiers, Mueller and Castro, and went to tell the commanding officer on the base before the training exercise that apparently killed him and all but two of the squad. Taking the story from the point of view that the two survivors give, it’s easy to think that someone who isn’t paying attention would become confused since is important to see how the story is being warped and taken out of context between the two of them, especially since each of them is telling their stories while being isolated from each other.

It’s only when one of the survivors is poisoned by an unknown assailant and dies while puking blood that things start to point to something and someone else that might be working behind the scene, at which point Hardy takes matters into his own hand and threatens the remaining survivor into revealing what really happened. The drug smuggling is then revealed, as is the apparent truth of what happened when West confronted the recruits about the operation and ended up getting killed after killing a couple of them. Hardy and Osborne conclude their investigation, and only shortly after it’s revealed that the base commander poisoned the other survivor, and is the real brains of the operation. When he tries to tempt Hardy into joining him and is refused he tries to kill Hardy but is shot by Osborne, who was eavesdropping on their conversation. If that was where things ended, a few critics might have been satisfied, but when Hardy says something that triggers a warning sense in Osborne’s mind she follows Hardy and finds that he and the last survivor of the debacle are working together, and are in fact part of a unit called Section Eight.

The reveal that all but two of the squad that apparently died in the jungle are, in fact, Section Eight, along with West, who’s alive after all, is kind of interesting since it lends an air of mystique and the idea that these people are not to be messed with since they can infiltrate a US Army base and disappear so easily. But despite the idea that the layering of this story was actually well done, critics didn’t really agree.