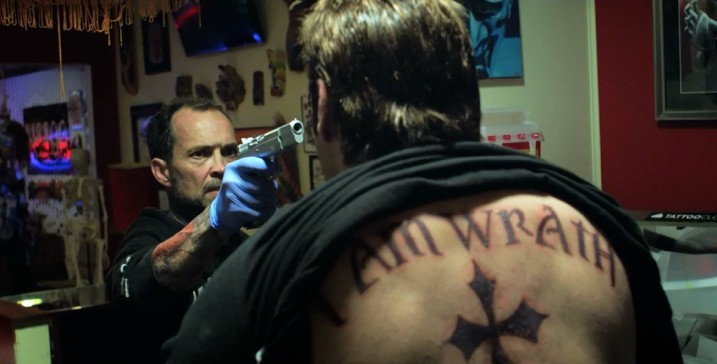 Every actor makes a bad movie now and then, but somehow this one could have been a little more cohesive had it not attempted to do so much. Overall, the story is kind of fun since it involves revenge, corruption, a buddy element, and, well, a lot more that kind of muddies the waters. But if a person focuses too intently on the elements that don’t matter as much it becomes easier to get confused by this movie and lose the main point. John Travolta plays Stanley Hill, who later goes by Wrath, a man loses his wife due to corruption at the state level as his wife is killed due to research that she’s done concerning a pipeline that’s been deemed unsafe but is still going to be approved by the corrupt governor. The governor, as the audience eventually finds out, is the reason why Stanley goes on a tear throughout the movie since after the death of his wife he becomes a bit unhinged and isn’t ready to listen to anything other than the death-cry of those that took her from him.

Enlisting the aid of his buddy in Special Forces, Dennis, played by Christopher Meloni, Wrath goes in search of the men that killed his wife to start with and ends up finding just how deep things go when it comes to her murder. To be honest, the movie does appear to skim over the surface of something that could be a little more in-depth, but it does so in a manner that’s both entertaining and has enough star power to be impressive. There isn’t a lot of pointless exposition, but then there isn’t a lot that explains the past that Stanley and Dennis share either since things move a little too quickly to get into this. But the action is kind of the point of this movie since unless a person is willing to keep up they might miss the exposition that’s laid into the action and therefore miss a lot of the point.

This is likely one reason that critics were less than accepting of this story since to be fair, trying to keep things moving at the expense of keeping people in the dark if they can’t keep up is something that many movies have attempted but very few have succeeded at. If the movie was judged simply by the action scenes however it would have likely done far better since Travolta and Meloni both manage to up their game in a big way as they take on the various thugs that come their way and are also easy to see as genuine tough guys that aren’t looking to be tough, but would prefer a peaceful life that doesn’t offer up too many challenges. A movie like this is rather simple unless one is going to be distracted by the many different moments within the story that veer off in one direction or the other only to come looping back to the main point. It’s not that often that we get to see Travolta in action movies, at least not as an active combatant, so when the moment does come it’s nice to see that he can sell the action and make it appear as simplistic as possible in some instances.

Meloni is actually quite enjoyable in this feature as well since he plays the wisecracking best friend as well as someone that’s insanely dangerous and is capable of handling himself in ways that might hearken back to Law & Order: SVU for some folks, but with a fun twist since unlike the role of Elliot Stabler he’s actually easygoing and more prone to deliver a sarcastic and witty comment than to brood and act like he’s about to unload on someone. In other words, Meloni is an underrated actor that knows how to fill out a role and the difference in one movie to another is easy to notice if one is really watching how he performs. When paired with Travolta he becomes even more likable as John has to take on the role of the heartless killer that’s out to seek revenge for his wife and a reason why someone dared to take her away from him.

All in all this movie is something that doesn’t feel as though it could have been beefed up any further without ruining the effect it took on, but it could have been pared down just a bit in order to focus on the most important elements in a cohesive manner. As it stands though, the movie was a lot of fun and did provide an engaging story that allowed people to care about why Stanley was so aggressive and had a take no prisoners kind of mentality when all was said and done. As for the critics, well, they don’t know everything.