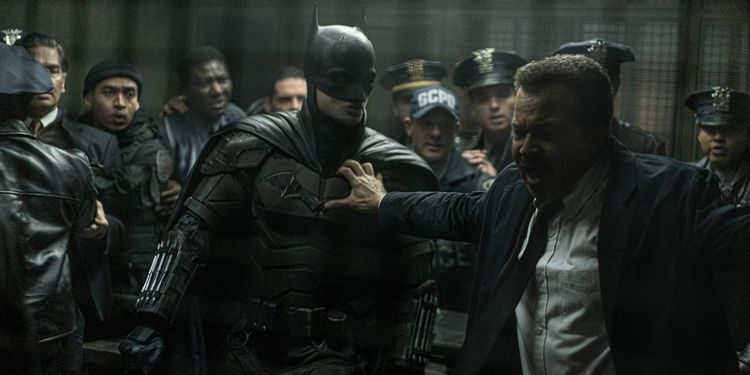 The Batman has finally arrived! After years of anticipation for the caped crusader, Matt Reeves has delivered one of DC’s most popular superheroes and it’s safe to say that the film has highly lived up to expectations. This time, Riddler is wreaking havoc amongst Gotham City, and Batman must follow a trail of cryptic clues in order to stop him. The Problem? Riddler’s game exposes the corruption that has plagued Gotham, and Batman must bring to justice everyone that has ruined its good name. This list will highlight the top five moments of the Warner Brothers movie.

This is cheating, but it’s really hard to narrow down five moments of The Batman. Both introductions serve their purpose extremely well. The first is Riddler, where he’s quietly watching Mayor Don Mitchell Jr. Once it’s revealed that the Riddler is standing behind him, it becomes an intriguing game of wait and see. We know that the masked villain is going to attack the mayor, but the question is when? What’s his purpose for hunting him down? And more importantly, what riddle will the famed DC villain leave behind? It’s a gripping scene that instantly grabs you by the throat and considering the nearly three-hour runtime, it’s nice that The Batman doesn’t move slowly.

Batman’s introduction is built-up slowly. There are several instances where it seems as if Batman is about to confront a criminal; however, the dark knight makes his grand entrance during an attempted mugging of an innocent civilian. The fight scene shows off Batman’s prowess and instantly showcases why Robert Pattinson was the perfect choice for the role. It also highlights Batman’s character, he’s not the murderous brute that the last incarnation was, and that moral complex is played up nicely throughout the film.

Surprise, surprise, Mr. Cobblepot is an innocent man in this situation. The obviously sleazy Penguin was next on Batman’s list of possible suspects, and the game of cat-and-mouse starts off in thrilling fashion. After Selina Kyle/Catwoman discovers the dead body of her friend, Annika Kosolov, the mobster comes out guns blazing. That eventually leaves the exciting chase sequence through the streets of Gotham. We knew Penguin would be caught. However, it was a matter of when, or even how. Perhaps someone would get in Batman’s way holding off on the next face-to-face encounter with Penguin? The chase scene was slick and exhilarating and that one moment where is seemed as if Penguin would get away, but the Batmobile emerging from the fire and debris was both gorgeous and awe inspiring. A top-notch chase scene that continued to elevate the film as a whole.

District Attorney Gil Colson Has A Bomb Around His Neck

After Bruce and Selina reveal the number of corrupt cops and politicians from the precinct, Colson becomes the next victim of Riddler’s twisted game. It starts off captivating, Colson’s truck crashes into the funeral and the District Attorney bursts out of the car with a bomb strapped around his neck. Eventually Batman reveals himself after hours of waiting, and this becomes the first confrontation with Riddler and Batman. Paul Dano is simply perfect as the Riddler. He’s a madman, but it never feels that he’s too over-the-top or a caricature of what a crazed villain should be. The entire scene was packed with tension and Peter Sarsgaard was especially strong here. He’s a damaged soul that got caught up in the criminal underbelly of this corrupt city. The bomb going off as Batman tries to get more information out of his him amped up the anxiety and unpredictability of The Batman. We knew that Colson’s fate was sealed once he refused to give up information to protect his family, but that the fact that Batman couldn’t save the poor District Attorney showcases that he’s in for a ride that he probably can’t handle.

The live-action films have never really dug in deep to Thomas and Martha Wayne. Their main purpose is to serve as the catalyst for Bruce Wayne to become Batman, but the stunning reveal that Wayne has some skeletons in his closet was well done. Eventually, it’s revealed that Wayne was a bit of a goof for trusting Carmine Falcone, but it added an interesting layer to Thomas Wayne’s character and the mystery surrounding his and Martha’s death. Thankfully, Reeves doesn’t make Falcone the perpetrator of his parents death, which could be a captivating dimension that the sequel touches upon. Plus, it adds to the mystery of Riddler’s puzzles and twisted the narrative that continued to make the film engaging.

A cat-and-mouse game to catch Carmine Falcone is on. Selina Kyle wants to kill the bastard, but Batman doesn’t want her to dive down to such lows. How Kyle and Batman get to Falcone keeps up the intensity of this nail-biting movie, but the levels of sequence before Falcone meets his demise is exhilarating. Everything from Batman taking down Falcone’s goons, to Selina handling the job herself was fantastic. Carmine eventually meeting his end because of Riddler nicely played into the narrative that Batman was unknowingly aiding the villain in taking down Gotham’s most corrupt.