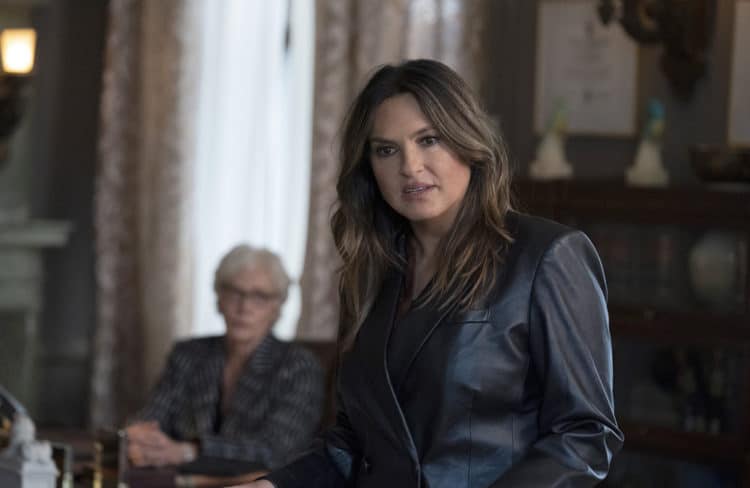 Law & Order SVU Episode 9: Nightmares In Drill City received a lot of buzz on social media because it explored the world of drill music which has become a popular genre of music over the last few years. At one point in the episode, Detective Tutuola even gives an ode to Chicago rapper Chief Keef who started the drill movement in hip hop culture. This isn’t the first time the NBC show has been inspired by current events or trendy pop culture topics and it won’t be the last. Nightmare In Drill City centers around a popular upcoming drill rapper named Gutta K. At the beginning of the episode, Gutta K uses Jasmine and seventeen-year-old Tori as decoys to get into a rival rapper spot. Gutta K and his crew rob and shoot the rapper and his crew. Tori gets shot in the leg during the robbery and they leave her behind to take the fall for the crime. When three of the victims die the case becomes a triple homicide and Tori is facing three life sentences if she doesn’t give up the individuals involved. ADA Cairisi calls in the SVU team to investigate the homicide when doctors discover bruises on Tori and she exhibits signs of being a sexual assault victim.

SVU is able to flip Tori and she eventually gives up Gutta K and the rest of the crew. Not that she had to in the first place becomes Detective Tutoula finds a newly uploaded video on YouTube of the rapper where in true Drill rap style he raps about the crime he committed the night before. Gutta K even flashes the victim’s chain in his video. The detectives have everything they need to charge the crew. At first the case seems open and shut. But Gutta K refuses to go down alone and he tells the detective that Tori is the one that set the whole invasion up. Tori knew one  of the victim’s Chris and she set up a “a date” with him so that they could invade their spot. Chris confirms that Tori texted him to come over confirming that Tori just may be responsible for the invasion.

At this point the detectives don’t know who’s telling the truth and Benson tells Tori that it’s time for her to give up some real details on her relationship if she doesn’t want to go down with the rest of the crew. Tori reveals an heartbreaking story of abuse and sex trafficking. She met Gutta K or G as they call him through Jasmine who she had been friends with. Tori felt pressured to have sex with G and he eventually started pumping her out to other men. She tried to stop at one point and he cracked her skull. Fortunately, she went to the hospital after he attacked her and even though she lied to the hospital her medical records from that night corroborate her story. ADA Carisi believes that Tori is a victim and wants to offer her leniency especially since she cooperated. However, the Bureau wants to make an example with the case and they believe that the optics of the case are bad and that it will look as if they are sending the black man to jail while the white girl receives a get out of jail free card. The best that Carisi can do is offer a twenty year jail sentence but Tori and her lawyer refuses to take the deal. They end up taking the case to trial.

As expected, the prosecutors are able to make a good case against Tori. After all,  she’s a white girl from  a good middle class family that enjoyed the rush of the crime lifestyle. The only way Tori can win the case is if they can find other women he has victimized. It turns out that Gutta K’a ride or die chick Jasmine is also a victim. Jasmine is a tough cookie and the beginning of the episode she followed Gutta K’s lead and implicated Tori for the invasion. Fortunately, the detectives are able to talk some sense into Jasmine and encourages her to not throw her life away for Gutta K. They also make it clear that now that Gutta K is locked up he can no longer control her. Carisi appeals to the Bureau again on behalf of the girls and this time he puts his foot down. He lets them no that in SUV they believe that justice is sometimes showing compassion and leniency and this is a case where leniency should be given.  Jasmine and Tori are given ten years of probation and court mandated therapy.