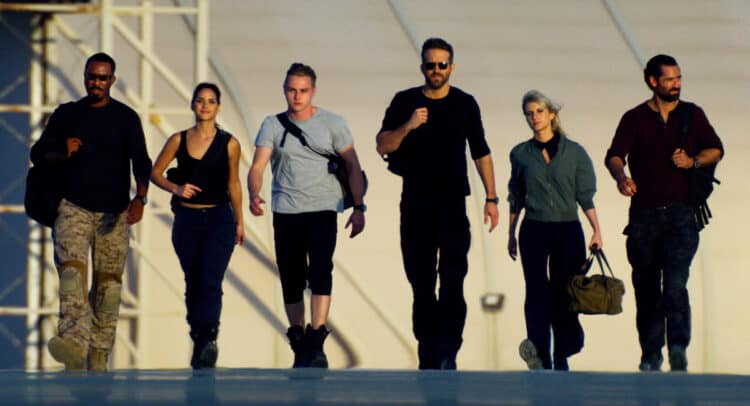 Some action movies suffer greatly from the hype they’re given since they don’t manage to live up to the promises that are made concerning their overall story. The upside of 6 Underground is that being a Netflix movie and not being given a great deal of hype compared to many other action movies makes it a lot easier to watch since there’s not as much expectation and a much greater chance to simply enjoy the action. It takes a while to get into the whole idea of the movie but it is worth watching it build as the first mission takes the group through the streets of Florence trying to escape an enemy as the movie reveals who each of them is, though it’s interesting to note that they’re only given numbers rather than names. From a certain point of view, this makes a great deal of sense and creates a barrier between them while allowing the team to function as a unit at the same time. But it does give a slightly impersonal feeling that gives the movie a bit of intrigue that many might find interesting.

One, an American billionaire and inventor, is the leader of the group and has a much more practical and even clinical outlook on the group, as the mission comes first, while everything and everyone else comes a distant second. This isn’t to say that he doesn’t care about the people he works with, but his dedication to the missions that he plans out tends to take up a great deal of his time. With the team he’s built, he plans out missions to take on and possibly take out some of the worst people around the world, the types that other governments can’t or won’t touch for various reasons. With his assembled team, One does what many others won’t even think about. But when Six, the driver in the first mission, is killed near the end, it becomes clear that One is not above leaving people behind in favor of completing the mission.

While this doesn’t sit well with the rest of the team, they accept it as well since the understanding is that, to the rest of the world, they’re already dead. This is the premise behind the team, after all, they’ve all given up a great deal to be able to move about freely, as their ‘death’ means that they’re detached enough from the worlds they came from so that they can move about and do what they do without endangering anyone but themselves. It’s not a perfect system however as the hitman of the group and the ex-CIA agent form a bond that One doesn’t approve of, but isn’t about to stop. Plus, the hitman still visits his mother, which is a big no-no. It’s fair to assume that this group would have its rough edges and that the members would grate on each other’s nerves from time to time, especially when One recruits Seven, a military sniper suffering survivor’s guilt after being ordered to refrain from saving his team during a mission. When Seven decides that this is the life for him, One brings him in, but it quickly becomes apparent that Seven isn’t the type to bottle up his humanity as he begins asking questions and doing his best to bond with the team.

Eventually, the others tell Seven their real names, save for One, whose sarcasm and slightly acerbic nature still makes him endearing, but also makes it clear that he’s not on board with the idea of getting too close, but again, he’s not going to stop it. The fact is that One is redeemed in a way when he’s seen to forego eliminating their next target when he has the chance to save one of his teammates, who at that point was being beaten to death. Essentially, this movie tends to show that tamping down one’s humanity to get the job done isn’t always as possible as one might think since sticking up for each other and having one another’s back at all times is vital to our existence. In a big way, the overall feeling of this movie is great since it is an action movie considering that the team’s main objective is to either replace or eliminate dangerous warlords and criminals that pose a threat to humanity, but being able to do this as a unit that cares about each other and watches out for each other is just as important.

If one could boil this movie down to the main points it would be that they’re set to stage a coup in a fictional country by replacing the current warlord with his democracy-loving brother, who is being held captive so that he can’t do the damage his brother thinks he can. When the team proves that they can make this happen, the warlord obviously tries to stop them but fails in the end due to a severe case of shortsightedness. All in all, this movie was a lot of fun without all the needless hype.