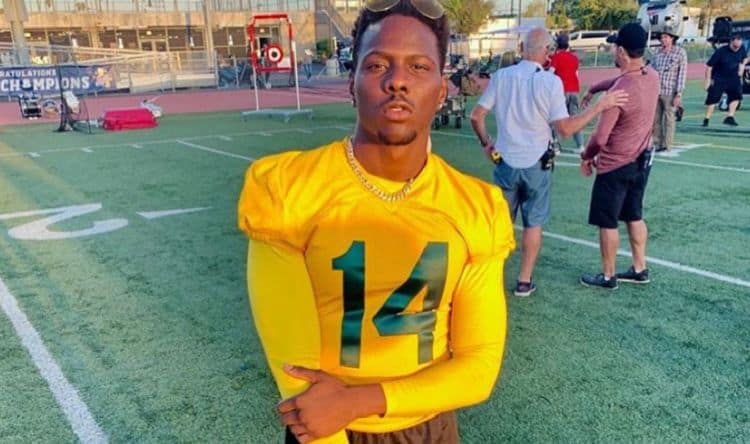 Since starting his professional acting journey almost a decade ago, Mitchell Edwards has been slowly working his way to the center of the spotlight. Over the last few years, he’s gained some serious traction. Mitchell got his first big opportunity in 2018 when he was cast in The CW football series All American. Although he had a relatively minor role on the show, being on the series opened up an even bigger door for Mitchell. He will have one of the main roles in the upcoming All American spin-off series called All American: Homecoming which is set to debut in February 2022. Keep reading to learn 10 things you didn’t know about Mitchell Edwards.

1. He Has Jamaican Roots

Unfortunately, we were not able to find much information about where Mitchell is originally from or what his upbringing was like. However, based on the flag in his Instagram profile, we do know that he has Jamaican ancestry on at least one side of his family.

Everyone knows Mitchell Edwards as an actor, but many people probably don’t know that acting isn’t the only area of the arts where his talent shines. Mitchell also enjoys writing and singing songs. That said, it doesn’t appear that he has released any original music.

3. He Started Acting As A Kid

Mitchell was just a kid when he realized that he was born to be a performer. When asked how he first developed an interest in acting, he told Pop Culturalist, “It was during my cousin’s eighth-grade graduation party. I was eleven years old at the time, and “Trapped In The Closet” was a very popular song. It was a hip-hop opera or musical. The song flipped between several different characters. Initially, I was supposed to perform with my cousin, but once everybody came into the room and the music started, he bailed on me. Luckily, I knew all the words, so I did it myself, flipping back and forth from each character.”

4. He Comes From A Supportive Family

There are lots of actors who have expressed that their loved ones didn’t initially support the idea of them getting into acting. Since very few people are actually able to make a living as professional actors, it is often seen as a very risky career path. Mitchell, however, is fortunate to come from a supportive family that has always supported his dreams of becoming an actor.

As a lover of the arts, Mitchell has very diverse taste – especially when it comes to music. While talking to Pop Culturalist, Mitchell revealed that Ed Sheeran is one of his favorite actors. The fact that he likes a variety of music is probably beneficial to him as an artist.

6. He Believes In The Power of Meditation

Part of being successful in life is making sure that you’re taking care of yourself. This is something that is very important to Mitchell. In addition to taking care of himself physically, he is also serious about taking care of his mental health. Meditation is one of his favorite things to do to keep himself grounded.

For lots of actors, being in the spotlight results in them sharing lots of details about their personal lives. However, that hasn’t been the case for Mitchell. So far, he has revealed very little about who he is outside of his work as an actor. Maybe he’ll decide to share more as his career continues.

8. He Has Some Helpful Advice for Aspiring Actors

Mitchell may not be exactly where he wants to be yet, but he already knows a thing or two about how to make it in the entertainment industry. As a result, he has some helpful advice for other up-and-coming actors. He told Digital Journal, “I would say work on yourself and with yourself. Building characters is your job as an actor, so investing time to build your own is a must. It isn’t easy to follow your dream, it takes a lot of heart and mental stamina to stay focused and positive, and there are a lot of things out of your hands, if you can find peace during the ups and downs, then you’ll be successful, and that peace comes from within.”

Making friends in the entertainment industry can be difficult. Since the business is so competitive, some people are willing to do whatever it takes to get ahead and they don’t care who they have to step on in the process. However, Mitchell has been fortunate to make a good friend in the business in fellow actor Trevor Jackson.

For the first few years of his career, Mitchell was primarily focused on movie roles. However, he did have a couple of TV roles and one of them was in the popular TV series Law and Order: Special Victims Unit. Mitchell appeared in one episode in 2016 as a character named Hype.