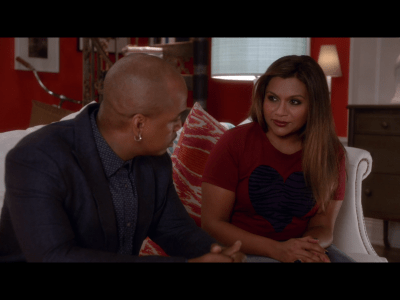 If I didn’t know any better I would say this recent arc of The Mindy Project featuring a newly single Mindy feels a lot like season 1. Only difference now is she’s also a single mother. Her flings don’t last long because she’s not willing to settle after being burned by Danny. She knows what she wants and yet she can’t seem to find an ideal guy for that perfect date of watching a movie from her couch.

As fun as it must have been for Mindy to experience the best of everything in New York with Marcus (Mr. New York himself) I could tell she wasn’t happy. As soon as she tried to incorporate changes in the office by ditching their menus from chain restaurants because they weren’t “the best,” I recognized an unhealthy pattern emerging. She’ll always try to change small things about herself when it comes to guys rather than stand her own ground. I was very glad to see she finally called it quits with Marcus when he couldn’t fathom the idea of staying in and watching a movie instead of traipsing across the city yet again.

Jody unexpectedly stopping by Mindy’s apartment on his birthday of all nights was interesting. You could tell she was surprised he wanted to stay and watch Cars (her favorite McQueen movie) and even more confused by the end of the movie/episode. She pretended she was asleep so as to avoid any awkwardness I assume but she definitely felt some type of way when he was leaving and stopped to just tenderly pat her head. I’m Team Mindy all the way here. Danny became a jerk after being the stuffy co-worker who seemed to have accepted Mindy for all her flaws until he found his breaking point. Who’s to say this potential relationship with Jody won’t end the same? He’s so vocal about appreciating Mindy for being a good mom and doctor but I’m positive even Danny would still say the same about her. Leo complicates their relationship of course, meaning Danny will never be entirely out of the picture. Bottom line here is Mindy finally (literally and figuratively) opened her eyes to the possibility of Jody. I’m so curious to watch how everything plays out now.

The nurses found a new use for Dr. C’s empty office: a nurses’ lounge to rival that of the doctors’. Morgan, Tamra, and Collette set up their own corners of the lounge with one common theme tying them all together: a silly poster about hating their work. It has cartoon cows on it, obviously not meant to be taken seriously and yet Jeremy takes it to heart. He’s offended they could possibly feel that way, wondering what this says about him as a person and a boss in particular. I for one hope Jeremy continues to treat the nurses to a fancy dinner every so often because they’re one funny bunch together.

The Mindy Project Season 4 Episode 20 Review: "The Greatest Date in the World"

Mindy can’t quite connect with Marcus but finds herself warming up to Jody.