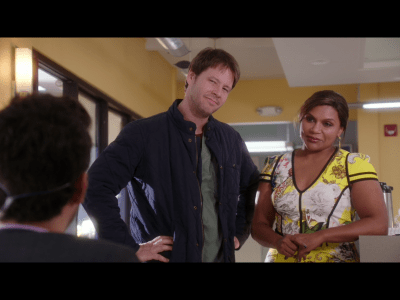 Negotiations between the nurses and doctors haven’t been going well on The Mindy Project but that doesn’t affect all of the friendships between the groups.

Literally no one takes the strike to heart more than Jeremy. He’s so stressed out about the hospital negotiation committee meeting with the nurses that he possibly suffers a heart attack. Jody was there when he collapsed, and later Mindy jokingly said his heart exploded, but I wouldn’t be laughing even if his chest pain was attributed to his “English frailty.”

During the strike Mindy cried wolf one too many time with these house calls to Ben. He saw through her excuses for help with Leo almost immediately, yet he played along. When he confronted her about it, he was proven right. She even gives in to her feelings for him by stopping him from signing a bad deal for the nurses out of desperation in the boardroom. With the strike settled now, they don’t have to keep their friendship/relationship a secret any more.

Of course my favorite scenes of the episode involved Morgan because he remains the absolute best. He makes sure to walk by Mindy’s building on his dog walking route and catches Ben leaving Mindy’s apartment on one of those house calls during the strike. Word spreads through the grapevine and everyone knows something’s going on. As Morgan later observes, it’s a classic love story: “handsome nurse lands a temperamental doctor.”

If Morgan approves of Ben, I think it’s a very good sign. He’s definitely charming and upfront with his intentions with Mindy, so I really don’t see any reason to root against him so far. Danny’s out of the picture in my mind. Then there’s Jody who’s another story entirely. His reaction to hearing about Mindy and Ben was to rat her out to Jeremy just as he was mingling with the nurses for Collette’s birthday. No one’s perfect, I get that, but Jody has had too many strikes.

The nurses’ strike comes to an end with surprising results in Mindy’s personal life.